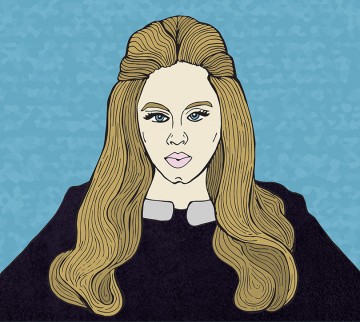 Adele Laurie Blue Adkins was born on May 5, 1988, in North London, England. She was the only child of Penny Adkins, an “arty mom” who was just 18 at the time of her birth, and a Welsh father, Mark Evans, who left the family when Adele was only 4 years old.

Evans remained in contact with his daughter up until her teen years, when his problems with alcohol and increasing estrangement from his daughter caused their relationship to deteriorate. By contrast, Adele grew close to her mom, who encouraged her young daughter “to explore, and not to stick with one thing.”

Early on, Adele developed a passion for music. She gravitated toward the songs of Lauryn Hill, Mary J. Blige and Destiny’s Child. But her true, eye-opening moment came when she was 15 and she happened upon a collection of Etta James and Ella Fitzgerald records at a local shop. “There was no musical heritage in our family,” Adele told The Telegraph in a 2008 interview. “Chart music was all I ever knew. So when I listened to the Ettas and the Ellas, it sounds so cheesy, but it was like an awakening. I was like, oh, right, some people have proper longevity and are legends. I was so inspired that as a 15-year-old I was listening to music that had been made in the ’40s.”

While clearly bright, Adele wasn’t oriented towards traditional classroom settings. Instead, her mother enrolled her in the BRIT School for Performing Arts & Technology, which counts Amy Winehouse as an alum.

While at school, Adele cut a three-track demo for a class project that was eventually posted on her MySpace page. When executives at XL Recordings heard the tracks, they contacted the singer and, in November 2006, just four months after Adele had graduated school, signed her to a record deal.

Adele’s debut album, 19, which is named for the singer’s age when she began recording the project, went on sale in early 2008. Led by two popular lead singles, “Hometown Glory” and “Chasing Pavements,” the record rocketed Adele to fame.

Released in the United States through Columbia Records, 19 resonated with American audiences, much as it had with British music listeners. Adele cemented her commercial success with an appearance in October 2008 on Saturday Night Live. At the taping of the show, the album was ranked No. 40 on iTunes. Less than 24 hours later, it was No. 1.

At the 2009 Grammy awards, Adele took home Best New Artist. In addition, the album earned the singer the distinction of being named the “Sound of 2008” by the BBC. That same year, she earned the Critics’ Choice prize at the BRIT Awards.

Her much anticipated follow-up album, 21, again named for her age at time of recording, did not disappoint upon its release in early 2011. Tapping even deeper into Adele’s appreciation for classic American R&B and jazz, the record was a monster hit, selling 352,000 copies within its first week.

Anchored by hits like “Rolling in the Deep” and “Someone Like You,” 21placed Adele in rarified air. In February 2011, she found herself with two Top 5 singles and a pair of Top 5 albums in the same week, becoming the only artist besides the Beatles and 50 Cent to achieve that milestone. And with 21staying at No. 1 for 11 weeks, Adele also broke the solo female artist record previously held by Madonna’s Immaculate Collection for consecutive weeks atop the album charts. 21 went on to sell more than 30 million copies worldwide.

In 2012, Adele swept the Grammy Awards, taking home six wins, including Album of the Year. “This record is inspired by something that is really normal and everyone’s been through it—just a rubbish relationship,” she said at the ceremony. In 2013, Adele won her seventh Grammy (Best Pop Solo Performance) for her hit single “Set Fire to the Rain.” That same year, the singer won a Golden Globe and an Academy Award for “Skyfall,” the theme song for the 2013 James Bond film of the same name.

Coupled with her success is Adele’s maturity and ability to avoid the fame-induced pitfalls that plagued Winehouse. Adele, whose larger, curvier body bucks the trend of most Top 40 female celebs, is also confident in not just her talent, but in her looks. “I’ve seen people where it rules their lives, you know, who want to be thinner or have bigger boobs, and how it wears them down,” she told Vogue magazine in 2011. “And I just don’t want that in my life.”

On October 22, 2015, Adele announced that she would release her third album, 25, in November. She posted 25‘s cover on Instagram, and said of her first full-length studio project in several years: “My last record was a break-up record, and if I had to label this one, I would call it a make-up record. Making up for lost time. Making up for everything I ever did and never did. 25 is about getting to know who I’ve become without realizing. And I’m sorry it took so long but, you know, life happened.”

The following day Adele released the ballad “Hello,” an epic track that again showcased her soaring voice over classic pop craft. The accompanying visual clip, featuring actor Tristan Wilds as the romantic interest, was directed by up-and-coming filmmaker Xavier Dolan and is reportedly the first music video to be shot with IMAX cameras.

“Hello” debuted at No. 1 on Billboard’s pop charts, thus becoming Adele’s fourth chart-topper and making history as the first single to receive more than one million downloads in a week’s time. The song has remained at No. 1 for multiple weeks in the U.K. as well.

25, released on Nov. 20, is a collection of emotional, sometimes plaintive songs looking at the ins and outs of relationships, owing much of its sound to traditional pop craft. The album is an international sales juggernaut as well, reaching No. 1 on iTunes in 110 countries. In the U.S., 25 sold 3.38 million copies in seven days, beating the ‘N Sync record of 2.42 million album copies sold in a week. Among other feats, 25 is also the fastest album to reach a million copies sold in the U.K., doing so in 10 days.

On June 29, 2012, Adele announced on her website that she was pregnant with her first child. The baby’s father is Adele’s boyfriend, Simon Konecki. Adele spoke to People magazine about being a mother: “I really want to be a mum. I better start getting on with it!” she said, adding that she wants to have a trio of boys by the time she’s 30.

Daniel is an illustrator/graphic designer based out of Austin Texas. He graduated from Pratt Institute with a Bachelors degree in Illustration and an Associates degree in Graphic Design. Daniel started his career in graphic design in the world of online casinos. Since then he’s worked with various clients from around the United States and Canada including but not limited to NHL, Subway, Paraco Propane, Pitney Bowes, Xerox, Conduent, Nestle Waters, The Spill Magazine, Stamford CT’s DSSD, Beechnut Baby Foods, Elizabeth Arden and much more.
RELATED ARTICLES
adeledaniel adamshello