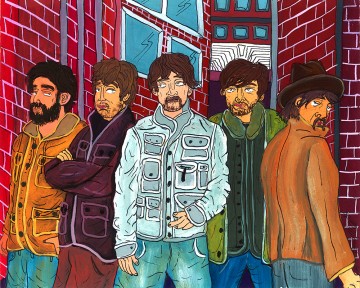 Sam Roberts (born October 2, 1974) is a Juno Award-winning Canadian rock singer-songwriter, whose 2001 debut release, I, became one of the bestselling independent releases in Quebec and Canadian music history.

Born in Westmount four weeks after his parents immigrated to Montreal from South Africa, Sam Roberts grew up on Cedar Avenue in Pointe-Claire, where his family moved when he was five years old. He attended St. Edmund Elementary School in Beaconsfield, Loyola High School in N.D.G. and John Abbott College in Ste. Anne de Bellevue before graduating from McGill University in Montreal. Roberts formed the band that eventually became known as William in 1993. The band’s name was changed to Northstar in 1996. Although the band gained some notice in independent rock circles, they never broke through to a national audience and broke up in 1999 after failing to release an album. Roberts’ bandmate George Donoso went on to significant success in indie rock circles with The Dears but Roberts struggled for several years afterward.

After disbanding Northstar in 1999, Roberts promptly recorded the full-length and now very collectible independent debut, Brother Down, at his home. In 2001, Roberts recorded and independently released a six-song EP, The Inhuman Condition. The EP sold slowly at first but following a re-release in the summer of 2002 on MapleMusic Recordings, his first single, “Brother Down”, became one of the biggest Canadian hits of the year and was followed by the second single, “Don’t Walk Away Eileen”, in the fall.

Roberts then signed to Universal Music and released his full-length major label debut, We Were Born in a Flame, in June 2003. That album’s singles, “Where Have All the Good People Gone?” and “Hard Road”, received a large amount of success, although mainly in Canada.

The band’s second album, Chemical City, was released in Canada in April 2006. The first single was “The Gate”, which quickly shot to number one on Canadian rock radio. The second single in Canada was “Bridge to Nowhere”, which won the Juno Award for Video of the Year in 2007. “With a Bullet”, the third song used to promote the album on Canadian radio, received little attention and no video was made for it.

Roberts’ third album, Love at the End of the World, was released in May 2008. It debuted at the number one position on the Canadian album chart, a first for Roberts. The lead single, “Them Kids”, debuted on iTunes on March 4, 2008.

Sam Roberts and his bandmates released their fourth studio album, “Collider”, on May 10, 2011. It is the first album under the moniker “Sam Roberts Band” instead of “Sam Roberts”. The first single, “I Feel You” was officially released to Canadian radio on February 28, with an iTunes Canada release of March 8.

Sam Roberts Band’s next full-length releases Low-Fantasy is due for release on February 11th.

Daniel is an illustrator/graphic designer based out of Austin Texas. He graduated from Pratt Institute with a Bachelors degree in Illustration and an Associates degree in Graphic Design. Daniel started his career in graphic design in the world of online casinos. Since then he’s worked with various clients from around the United States and Canada including but not limited to NHL, Subway, Paraco Propane, Pitney Bowes, Xerox, Conduent, Nestle Waters, The Spill Magazine, Stamford CT’s DSSD, Beechnut Baby Foods, Elizabeth Arden and much more.
RELATED ARTICLES
daniel adamsportraitssam roberts band