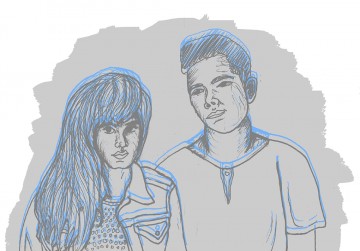 Purity Ring are a Canadian electronic music duo formed in 2010 and originally from Edmonton, Alberta. The band consists of Megan James (vocals) and Corin Roddick (instrumentals)  James played piano and Roddick played drums prior to the band’s inception, however neither currently play them as their primary instrument for Purity Ring. During live shows, Roddick uses a custom-built, tree-shaped instrument to drive both live sound and lighting. Additionally, during live appearances both wear clothes custom designed and sewn by James. James uses written work which she originally did not intend to release to the public for many of the band’s lyrics.

Daniel is an illustrator/graphic designer based out of Austin Texas. He graduated from Pratt Institute with a Bachelors degree in Illustration and an Associates degree in Graphic Design. Daniel started his career in graphic design in the world of online casinos. Since then he’s worked with various clients from around the United States and Canada including but not limited to NHL, Subway, Paraco Propane, Pitney Bowes, Xerox, Conduent, Nestle Waters, The Spill Magazine, Stamford CT’s DSSD, Beechnut Baby Foods, Elizabeth Arden and much more.
RELATED ARTICLES
daniel adamsportraitspurity ring