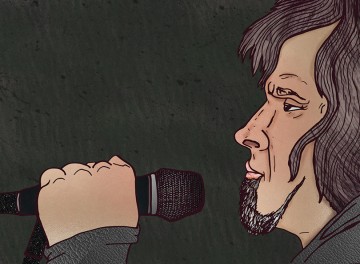 Singing with a deep, nicotine-ravaged growl that’s rich, strong, and sensuously forbidding, Mark Lanegan first rose to fame when his band the Screaming Trees won a taste of mainstream recognition in the ’90s. But like other noted artists, Lanegan has carved out a strong identity of his own as a vocalist and songwriter informed by the blues but willing to take his darkly poetic sensibility wherever his muse was pointing him, from hard rock to electronica.

Born in Ellensburg, Washington on November 25, 1964, Lanegan, by his own word, grew up in a dysfunctional household and developed a powerful appetite for liquor and drugs in his teens that led to scrapes with the law. When he was 18, he struck up a friendship with Van Connor, who shared Lanegan’s interest in music. Lanegan originally agreed to play drums in a band with Van and his brother, Gary Lee Connor, but when it was decided Lanegan was a better singer than a percussionist, Mark Pickerel came on board to play drums with the band that became known as the Screaming Trees. The Screaming Trees released their first album, Clairvoyance, in 1986, but it wasn’t until 1992 that the band scored a commercial breakthrough when their song “Nearly Lost You” — which appeared on the soundtrack to the movie Singles as well as their album Sweet Oblivion — became a surprise hit thanks to extensive MTV play.

By the time “Nearly Lost You” hit the charts, Lanegan had already launched a solo career. He and Kurt Cobain shared a passion for the blues, particularly the music of Lead Belly, and the two formed a side group with Krist Novoselic and Mark Pickerel known as the Jury, with a plan to record an EP of Lead Belly tunes. While the Jury project soon fell apart, Lanegan used a recording of Lead Belly’s “Where Did You Sleep Last Night” with Cobain and Novoselic as the launching pad for his darkly atmospheric solo debut, 1990’s The Winding Sheet. The album earned enthusiastic reviews, but after the success of “Nearly Lost You,” Lanegan and the Trees hit the road for a long tour; by most accounts, the group had a strained relationship in the best of circumstances, and as weeks turned into months on the road, the hard-drinking band clashed frequently. After the Sweet Oblivion tour ran its course, the group took a break and Lanegan cut another solo album, 1994’s Whiskey for the Holy Ghost, a more dynamic set that once again impressed critics with Lanegan’s powerful vocals and deep lyrical visions. In 1996, the Screaming Trees finally released their follow-up to Sweet Oblivion, but Dust failed to live up to the commercial success of their breakthrough album, despite the modest success of “All I Know” as a single and the band joining the bill for the 1996 Lollapalooza tour.

In 1998, Lanegan released his third solo album, Scraps at Midnight, followed by I’ll Take Care of You, a collection of covers, in 1999, and in 2000, after playing a show to celebrate the opening of the Experience Music Project in Seattle, the Screaming Trees announced they were breaking up. With his main band out of the picture, Lanegan began to dive deep into collaborations with other acts; he’d already contributed to tribute albums honoring Willie Nelson and Skip Spence and appeared on Mike Watt’s solo debut, Ball-Hog or Tugboat?, and in 2000, he performed guest vocals on the breakout album from Queens of the Stone Age, Rated R. While Lanegan was never an official member of QOTSA, he became a valuable ally to leader Josh Homme, contributing vocals and collaborating on songs for 2002’s Songs for the Deaf, 2005’s Lullabies to Paralyze, and 2013’s Like Clockwork. In 2003, Lanegan worked with former Afghan Whigs frontman Greg Dulli on the sophomore album from Dulli’s project the Twilight Singers, Blackberry Belle, and he would also appear with Dulli on two subsequent Twilight Singers albums, 2004’s She Loves You and 2011’s Dynamite Steps. Dulli and Lanegan would also record a collaborative album under the name the Gutter Twins, 2008’s Saturnalia. In 2005, Lanegan recorded an EP of duets with Isobel Campbell, formerly of Belle & Sebastian, entitled Ramblin’ Man; the pair would go on to record three full albums together, 2006’s Ballad of the Broken Seas, 2008’s Sunday at Devil Dirt, and 2010’s Hawk. The U.K. electronic group Soulsavers brought Lanegan in to sing on their albums It’s Not How Hard You Fall, It’s the Way You Land (2007), Broken (2009), and The Light the Dead See (2012). And Lanegan became a regular contributor to the Jeffrey Lee Pierce Sessions Project, an ad hoc ensemble that interpreted songs by the late Gun Club frontman; Lanegan appeared on the albums We Are Only Riders (2009), The Journey Is Long (2012), and Axels & Sockets (2014).

While some of Lanegan’s collaborations got more press than his own work during this period, he hardly had his solo career on the back burner. 2001’s Field Songs offered the sort of dark, roots-oriented songs that were his trademark, and 2004’s more rock-oriented Bubblegum was the first album credited to the Mark Lanegan Band, though instead of a set band, the tracks featured a rotating variety of accompanists, including Josh Homme and Polly Jane Harvey. A second Mark Lanegan Band set, Blues Funeral, appeared in 2012, while Lanegan dropped two albums in 2013, a collaboration with multi-instrumentalist Duke Garwood titled Black Pudding, and his second album devoted to covers, Imitations. 2014 brought third full-length from the Mark Lanegan Band, Phantom Radio. By this time, Lanegan’s solo career had generated enough music to merit a “best-of” album, and with this in mind, Light in the Attic issued the compilation Has God Seen My Shadow? An Anthology 1989-2011.

Daniel is an illustrator/graphic designer based out of Austin Texas. He graduated from Pratt Institute with a Bachelors degree in Illustration and an Associates degree in Graphic Design. Daniel started his career in graphic design in the world of online casinos. Since then he’s worked with various clients from around the United States and Canada including but not limited to NHL, Subway, Paraco Propane, Pitney Bowes, Xerox, Conduent, Nestle Waters, The Spill Magazine, Stamford CT’s DSSD, Beechnut Baby Foods, Elizabeth Arden and much more.
RELATED ARTICLES
daniel adamsmark laneganportraits