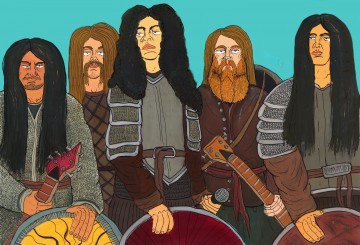 Formed in Southern California in 2008 when vocalist James Paul Luna and drummer Tyler Meahl diverged from Pasadena metal squadron White Wizzard and teamed up with San Diegan guitar hero Eli Santana, the band was called Sorcerer until it became clear that the moniker didn’t quite capture the rarefied nature of the members’ collective talents. Sorcerer became Holy Grail. The band became so unstoppable that California just couldn’t contain them and now, like their spiritual forefathers in Iron Maiden, Judas Priest and Dio, Holy Grail are poised to bring their hook-laden shred anthems to an arena near you.

Holy Grail are heavy metal personified, possessing a seemingly infinite arsenal of mind-blowing riffs, skyscraping vocal melodies and devastating drum dynamism. Not mention the kind of six-string acrobatics and straight-up power-shredding that would make Yngwie Malmsteen chuck the proverbial goat in sweep-picking solidarity. “We shred and we’re serious about it,” Luna offers. “This is not a tongue-in-cheek thing. It’s not throwback or retro. Holy Grail is a modern band with a new twist on the best of old-school metal with death metal riffs, modern breakdowns and power-metal singing. We just tried to pick stuff from all our favorite bands and make the best blend of metal we could.”

But don’t take our word for it—or Luna’s. The fine folks at Decibel magazine knew exactly what they were talking about when they hailed HOLY GRAIL as “the most exciting prefix-free metal band to come out of L.A. in the last two decades.” The esteemed editors at UK’s Metal Hammer nominated the gentlemen of the Grail for the magazine’s “Best New Band” award at their annual Golden Gods ceremony before Holy Grail even had an album out. But a certain tall, handsome genius over at Thrasher summed it up best when he proclaimed, “Holy Grail are the reason that heavy metal will never die.”

After basking in the glory of last year’s critically acclaimed “Improper Burial” EP, Holy Grail have finally unleashed their full-length debut, “Crisis In Utopia.” The title comes from a short story that Luna found in a 1930s-era sci-fi mag. Inspired, he transposed the tale’s apocalyptic theme to the band’s L.A. stomping grounds. “The way I envisioned it, it’s about what would happen to Hollywood in end-times, the fate of all these people who have no idea how to survive without modern conveniences,” he explains. “Then all the humans are killed off and the next species forms from their parasites. It was kind of a sick pleasure to write.”

Yeah, you say, but What Does It All Mean? What it means is that you’ve been reading this thing for way too long. Just press fucking play already.