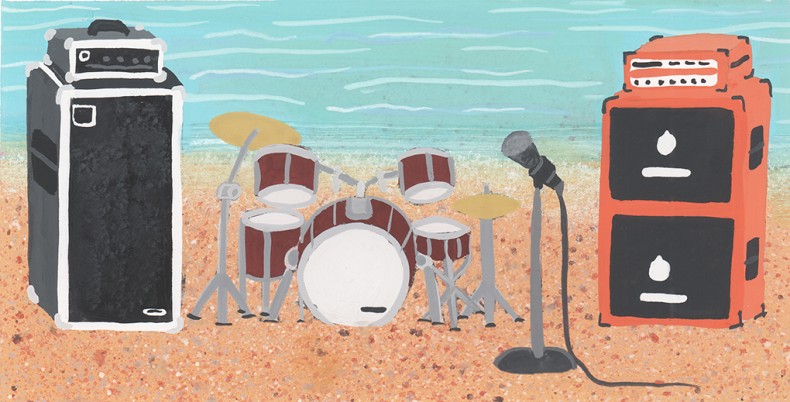 Beach Slang are a three piece punk rock band from Philadelphia. Members also play in Weston, Crybaby and Ex-Friends. They have been described as sounding like “a one-night stand between The Psychedelic Furs and The Replacements”.

Their debut EP – Who Would Ever Want Anything So Broken was released on Dead Broke Rekerds. Their second EP – Cheap Thrills on a Dead End Street was released in September 2014 on Tiny Engines.

The Things We Do To Find People Who Feel Like Us is the debut full-length album by American rock band Beach Slang, released on October 30, 2015, through Polyvinyl Record Co. The release received widespread acclaim from music critics. At Metacritic, which assigns a “weighted average” rating out of 100 from selected independent ratings and reviews from mainstream critics, the album received a Metascore of 82/100, based on 19 reviews, indicating “universal acclaim.”

Daniel is an illustrator/graphic designer based out of Austin Texas. He graduated from Pratt Institute with a Bachelors degree in Illustration and an Associates degree in Graphic Design. Daniel started his career in graphic design in the world of online casinos. Since then he’s worked with various clients from around the United States and Canada including but not limited to NHL, Subway, Paraco Propane, Pitney Bowes, Xerox, Conduent, Nestle Waters, The Spill Magazine, Stamford CT’s DSSD, Beechnut Baby Foods, Elizabeth Arden and much more.
RELATED ARTICLES
beach slangdaniel adamspolyvinyl record co.

by Freda Looker on December 9, 2019
THE DEADBEAT BANG OF HEARTBREAK CITY A CONVERSATION WITH JAMES ALEX OF BEACH SLANG One fateful night when Beach Slang was still in its [...]

by Josh Whitworth on May 18, 2018
Quiet Slang Everything Matters But No One Is Listening Polyvinyl Records First off, go listen to Beach Slang, then go listen to Quiet Slang. There seems to be [...]
9.0