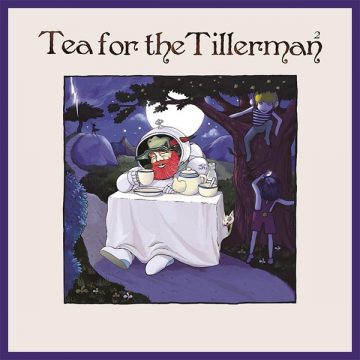 Half a century after Cat Stevens released Tea for the Tillerman, we find Yusuf taking a retrospective look at his own breakthrough album. Fittingly enough, the concept for the album came to fruition from a conversation between Stevens and his son on how to honor the 50th anniversary of this landmark.

The artwork has also moved 50 years forward, with the tillerman now donning a spacesuit instead of his black jumper; he now drinks tea under gloomy moonlight as opposed to the cheerful sunshine found on the original.

On the opener, “Where Do the Children Play”, Yusuf substitutes a keyboard for the original guitar picking. Background harmonies are also added; however, this does distract from his now weathered, yet still compelling, vocal. Overall though the arrangement doesn’t differ all that much from the original and stands as one of the best tracks.

Along with the added element of the electric keyboard, the electric guitar is also featured quite heavily, most notably on “Miles from Nowhere”, “Hard Headed Woman” and “On The Road To Find Out”, the latter transformed from a folk tune with dense vocal harmonies into a gritty blues number that is incredibly underwhelming.

Perhaps both Stevens and the original album are best known for the mega-hit “Wild World”. Here, the song is almost unrecognizable as it’s transformed into “Wild World Rag”. As the title suggests, Yusuf alters the folk-rock gem into a ‘20s ragtime jazz. Gone is the powerful vocal and arpeggiated guitar picking, instead we have schmaltzy piano and clarinet solos which sound out of place on this tune.

Tea for the Tillerman² really shines is when the tracks are close enough to the original but have subtle nuances that differentiate them. “Father and Son”, “Where Do the Children Play”, and “Sad Lisa” all work quite well with their newer arrangements. On the other hand, “Wild World Rag”, “On the Road to Find Out” and even “Longer Boats” are unable to compel the listener in these reimagined counterparts. The latter features a cringeworthy “inspirational” spoken word bridge section before breaking into reggae-funk for the remainder of the song. This could have worked on a corny ‘90s hip-hop song but not for Cat Stevens.

The crowning achievement on Tea for the Tillerman² is “Father and Son”. Probably the most powerful and certainly the best track on the original album, it seems a no-brainer that it would be the standout on the remake. This version finds Yusuf singing a duet of both parts father & son with his 22-year-old self. The age difference in the vocals really helps the believability of father and son conversing. While it still doesn’t trump the original, this one is a close call.

With the exception of “Father and Son”, none of the tracks on the album can touch the originals. There are some great moments here but, going in, everyone must know deep down that these 21st century reimaginations won’t be able to capture the gusto of their 1970 counterparts.

As a child growing up in the suburbs, Ryan found music as a way to soothe his boredom. After first hearing AC/DC at the age of 10, he was hooked on music. Tracing its roots to the ‘50s, he became obsessed with Elvis, Buddy Holly and Chuck Berry. Somehow that led to grunge, then psych-rock, then jazz, etc. The list goes on and on and his collection of vinyl records continues to grow.
RELATED ARTICLES
album reviewalbum reviewscat stevens
10