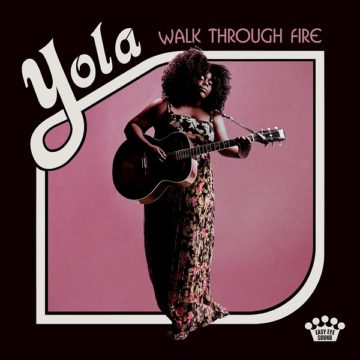 Country soul artist Yola’s personal story is inspirational. With more than her fair share of personal traumas and adversity, including growing up with a parent who banned her from making music,  stress-induced voice loss, and having been physically engulged in flames in a house fire – hence the title of her first album, Walk Through Fire. With her top-shelf voice, Yola’s debut had an undeniable potential to be memorable.

“Faraway Look” is a perfect opener, with Yola transitioning smoothly from buttery jazz vocals to more powerful singing that few could even attempt. Curiously, the next track, “Shady Grove”, sounds as if it were written a century ago, with a lullaby-style verse that would have been better-suited for the closer. “Ride Out in the Country” is the lead single, an obvious choice since it is seemingly tailor-made for FM country radio.

As the album proceeds, numerous problems arise again and again. I have heard it said that the saddest thing is life is wasted talent, and production decisions and clichéd songwriting abound here. At various points, Yola croons about handing out paper plates, complains that the cards are stacked against her, and describes her love as walking “the darkness to your bed/To dream the dreams that live inside your head”.  For far too much of the album, the pace is almost at a standstill, and the end result is uninspired and soporific.

This listener left Walk Through Fire lamenting what could have been.  Yola is certainly capable of making a much better album. Here’s hoping her sophomore effort takes more risks.

Wayne grew up in southwestern Virginia on a steady diet of country music before graduating to the Clash, Danzig, Fugazi and the indie and grunge scenes in the 1990s. He lives for live music and writes for Spill as a backup plan in case Trump wins re-election and he needs some Canadian connections.
RELATED ARTICLES
album reviewalbum reviews
9.0