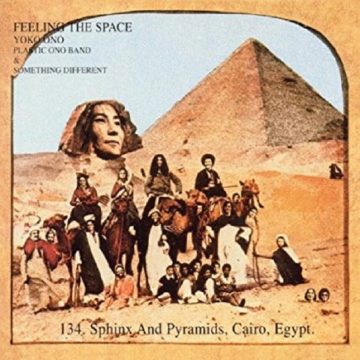 Feeling The Space is the third and final installment of Phase Two of the Yoko Ono Reissue Project, courtesy of Secretly Canadian and Chimera Music. It was originally released on Apple Records in November of 1974. It was her last album for Apple, and the first album she produced entirely by herself. It was also the last non Beatle album released on Apple.

Ono had a lot riding on this one. Lennon and her band had officially split by the time Feeling The Space was released, and Lennon is only on two songs (as John O’Cean). The album was originally intended to be a double album, but the powers that be at Apple felt that a third double LP was too much, and it was edited down to a single one. There were hopes that this would be the commercial breakthrough for Ono. She also toured with a pretty heavy back-up band, known as Plastic Ono Supergroup (featuring Michael and Randy Brecker and Dave Spinozza). This would explain why there is a great deal of bonus material for this release (the bonus tracks are available through download with th vinyl edition). The live song, “I Learned To Stutter/Coffin Car” is most interesting.

As good as this album is, and it is actually quite great, it falls just short of her previous album, Approximately Infinite Universe. Having said that, Feeling The Space is still an incredible album. She returns to many of the themes of her last album, such as feminism, world issues, and world peace, but there is an overall sense of sadness throughout, perhaps due to her break up with Lennon. Perhaps she was just tired but this is a melancholic album.

Again, she went for more conventional songs on this album, and she comes up with some incredible melodies, lyrics and moods. Listen to “Woman of Salem”, a song about the Salem Witch Trials. It is downright eerie. An incredible melody and emotional lyrics make this track stand out, but by the end you feel like looking over your shoulder. An extremely brilliant song.

“Woman Power” features some incredible rhythm patterns and when remixed in 2014, it peaked at number six on the Billboard Dance Charts. It failed to chart when issued as a single in 1974, but as usual, she was just ahead of her time. Forty years later, the song was jamming the dancefloors.

As with other albums from Ono, it is deeply personal at times. Listen to “If Only” and see if you do not become choked up. “I saw me crying when you left the room. The wound has healed long since then. But my soul keeps crying…”  Poetry, pure and simple.

The album is not without humour.  The last song on the album, “Men Men Men”, features a funny cameo from John — two words —  “Yes dear” at the end of the song.  It brings a smile to your face. Ono’s humour would surface more often in the ’80s and ’90s, but it could be seen throughout her other albums as well.

Once again, Secretly Canadian and Chimera have done an excellent job with this reissue. It is available in a number of formats (vinyl, white vinyl, CD and streaming/download) and great effort has been taken with the details of the reissue. It has a nice Grapefruit label which is a nod to Ono’s famous book, Grapefruit. It sounds great, and it is nice to have the album available again. It has not been available on vinyl since it was released in 1974. It was available on CD in 1997 by Rykodisc with one bonus track, which has been included here.*

As with Approximately Infinite Universe, Ono writes an essay on the back sleeve, and that is well worth the read. Also a wonderful front cover design, which I have always felt demonstrated her sense of humour.

On a very personal note, this was this first album by Ono I purchased. I bought it the same day I bought Mind Games. Even at the age of ten, I knew there was something here that was not found on other albums. I started buying her other albums and never looked back.

I am sincerely hopeful these reissues will alter some perceptions of Ono. This is a brilliant album that deserved a better fate than its low chart placing in 1974/1975.  Her dance music is now recognized, perhaps it is time to extend that to her studio albums.