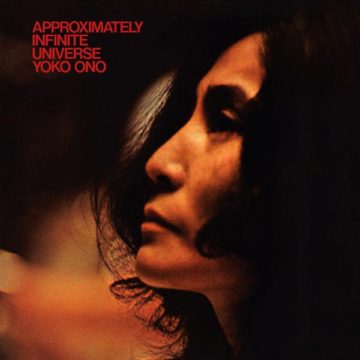 Secretly Canadian and Chimera Music continue with phase two of The Yoko Ono Reissue Project with the release of Approximately Infinite Universe, perhaps Yoko Ono’s best album of her 1970’s period. Again, the album is available in numerous formats, vinyl, white vinyl, CD and streaming. This is a welcome release for Yoko fans.

Approximately Infinite Universe was originally released by Apple records on January 8, 1973. Ono used the same backing band that she and John Lennon had used for their 1972 release, Some Time In New York City, that album being only six months old when this double album was issued. Ono must have been remarkably prolific at this time, as she wrote/co-wrote all but two songs on the studio album Some Time In New York City and still had material left for this album. Further, the backing band for both albums, Elephant’s Memory, also issued an album on Apple in 1972, which Ono co-produced. She was very busy at this time.  As an interesting footnote, it has often been rumoured that Mick Jagger guested on this album, playing guitar. This may not be so far fetched, and he is name checked in a song (“I Felt Like Smashing My Face In A Clear Glass Window”). Further, Lennon would produce Jagger’s song “Too Many Cooks (Spoil The Soup)” in 1973. That song was not officially released until 2007 (The Very Best of Mick Jagger).

Approximately Infinite Universe is a brilliant album, and at this point, her most commercial. Gone were her experimental sounds and vocals. This is an album full of more standard rock songs and ballads. This was the album that proved Ono could not only write and play, but also produce. Although Lennon is credited as co-producer, by his own admission, he was more or less absent during the recording of this album (he did play guitar on all tracks and provide backing vocals). But Lennon was dealing with his immigration at the time, lawsuits from Klein and a declining solo career (Some Time In New York City, unlike Imagine, was not a hit, not even making the upper half of the charts). Although she made it quite contemporary, it has aged remarkably well.

Ono persevered through it all, and the result was Approximately Infinite Universe, a strong feminist album full of great tunes and even stronger lyrics. Ono tackles a great many subjects, all within a feminist framework. Once again, the album was not without controversy. One song, “I Want My Love To Rest Tonight” was outright rejected by many in the feminist movement, Gloria Steinem amongst them and  at the time came under a great deal of fire from the left and the feminist movement.  Articles were written on how she betrayed the movement. Of course, Ono saw it as nonsense, but once again Ono was stirring the pot.

The album is full of great songs, as evidenced by the number of songs which were covered by other artists. Of Montreal, Anika and Trio have taken their turns at songs from Approximately Infinite Universe. Boy George even covered a song from the album, “Death Of Samantha” (This Is What I Do album, 2013). Although this was her first real attempt at making a more accessible album, the lyrics are some of the best she ever wrote. Children’s rights, women’s rights, politics, and personal issues are all featured in this album. Look at “Now Or Never”, the first single released from the album. “Are we going to keep putting off until it’s too late?  Are we going to be known as the century of fear?”  Words written in 1972, but applicable to today. In fact you could say the same thing for the rest of the album.

As with the other releases, Secretly Canadian and Chimera have done an excellent job with this reissue. Beautifully remastered, and all the original lyrics sheets and inserts are included. Also, a new booklet featuring some stunning photography. The album has not been pressed on vinyl since 1972 but it was reissued in 1997 with two bonus tracks. Those tracks appear on this new reissue as well.

The early 1970’s was a chaotic time for Lennon and Ono. It is astounding they released anything at all. This turmoil is reflected on this album, but as usual Ono has the ability to turn pain into art. Following the release of this album, Lennon would work on Mind Games, and his 18 month long weekend would start. Ono would carry on to produce Feeling The Space (1974).

Approximately Infinite Universe is brilliant.  The songs are well put together and it flows beautifully. Had any other artist released this album, it would be featured on classic rock stations. This reissue gives us the opportunity to correct this and it is time to discover this gem of an album.

Born and raised in Whitby, Aaron discovered music through his love of The Beatles. This led to a career in radio, writing for various publications, and ultimately a radio show about The Beatles (Beatles Universe), which ran for over four years. When not immersed in music, Aaron enjoys spending time with the loves of his life -- his wife Andrea, and daughters Emily and Linda (all of whom have an intense love of music too).
RELATED ARTICLES
album reviewssecretly canadianyoko ono
7.0