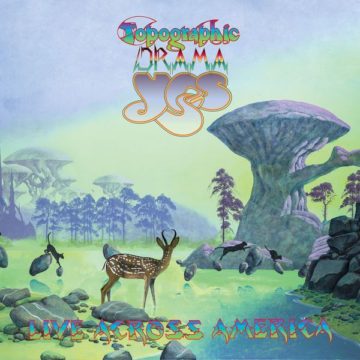 Formed in 1968, Yes is a band that interestingly has no original members left in the band. For Topographic Drama – Live Across America, guitarist Steve Howe (who joined the band in 1970) and drummer Alan White (who joined in 1972) are the oldest members from Yes’ glory days. Indeed, this album borrows its title from their classic album Tales From Topographic Oceans, but that is where the similarity ends. This is a collection of live performances from their 2017 tour and features songs from their 10th studio album, Drama, as well as Yes classics.

Besides Howe and White, the current line-up includes Geoff Downes (who joined Yes in 1980) on keyboards, Billy Sherwood (who has worked with the band since 1991 in many different capacities) on bass and Jon Davison (who joined the band in 2012) on vocals. Jay Schellen has also joined the tour for assist with drumming duties.

This band sounds like Yes. Davison sounds a lot like Jon Anderson, and the keyboards and other musical parts are replicated beautifully. They recreate the Yes sound faithfully and this can only mean a pleasurable listening experience. Although this line-up issued a rather brilliant and underrated album in 2014 (Heaven and Earth), that album is not represented here, nor is anything post 1980’s Drama. This is a shame as there is some mighty fine music that fans are missing out on.

What Yes does is feature the classic songs. They tackle six songs from Drama and songs from The Yes Album, Fragile, Closer to The Edge (which includes my favourite song on the album. and highlight “And You And I”), and of course Tales From Topographic Oceans (“The Revealing Science of God” is expertly played here by the band, but Howe deserves special mention for his playing here). The songs sound fresh, exciting and the band is clearly having fun playing them. The album is well recorded and played beautifully. Not so much a greatest hits, but certainly a best off.

Yes fans will be split with this one, however. Jon Anderson, original vocalist, has formed another ‘Yes’ band, Yes Featuring Jon Anderson,Trevor Rabin, and Rick Wakeman, who also do a fine job of replicating Yes. But in the end, what we have here is a great, prog rock album. Perfect for Yes or just prog rock fans. It sounds good, the music is played beautifully and it is a pure joy to revisit these songs again.

Born and raised in Whitby, Aaron discovered music through his love of The Beatles. This led to a career in radio, writing for various publications, and ultimately a radio show about The Beatles (Beatles Universe), which ran for over four years. When not immersed in music, Aaron enjoys spending time with the loves of his life -- his wife Andrea, and daughters Emily and Linda (all of whom have an intense love of music too).
RELATED ARTICLES
album reviewsrhino recordsyes
10