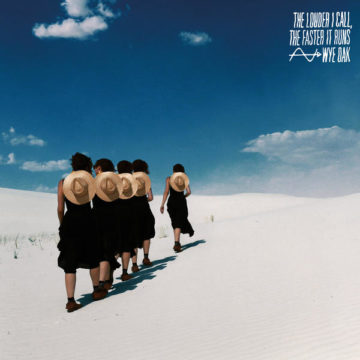 Wye Oak
The Louder I Call, The Faster It Runs
Merge Records

Such is the breadth of the change their sound has undergone, it may not be even possible to compare this Wye Oak album, their fifth, to their previous offerings. While vocally, the band is on as solid ground as ever, this is a chaotic whirlwind of synths and production that keeps the listener constantly guessing and occasionally breathless.

Jenn Wasner and Andy Stack have never shied away from re-invention or experimentation, all the while maintaining their folk/Americana roots, most often via Wasner’s exceptional, slightly twangy vocals. This is again the case on The Louder I Call, the Faster It Runs, that creative freedom and experimental attitude abundantly apparent right from the get-go. They have also never been a band that has shied away from volume and though Wasner’s is a voice that is capable of beautiful tenderness, it covers some truly breath-taking ground over the 12 tracks on this album. Perhaps the greatest example of both their approach to instrumentation and Wasner’s vocal range is “Symmetry”, a thundering rock song chock-full of sound and range.

It has to be said that there is an occasional over-reliance on synths and production to drive some of these songs (both “The Instrument” and the album’s title track are guilty of exactly this), especially considering how great the band do sound when they lean harder on their roots, but there is little chance, given the quality of the album as a whole, that many a listener will come away from The Louder I Call, the Faster It Runs disappointed.

Br. lives in southern Ontario, grew up on The Beatles and The Journeymen, spent his adolescence immersed in grunge, and his adulthood in British alternative. His greatest joy is seeing his son dance and grow into his own appreciation of the indescribable joy of music...
RELATED ARTICLES
album reviewsmerge records
7.0