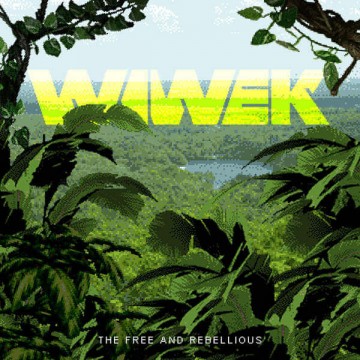 Wiwek
The Free And Rebellious
OWSLA

It’s pretty rare for someone to create and establish a unique brand of music and Dutch DJ Wiwek is trying to do just that.  His self-declared “Jungle Terror” approach to house music is suitably described by this 5 song EP, being “Free and Rebellious.”

The EP came as a result of Wiwek and LA-based Skrillex wanting to work together and feeling that collaborating on a single was not sufficient enough for them to experiment with each other’s sounds and vision for their style of high-intensity house music.

Wiwek wanted to create a sound that would conjure being in a jungle fighting off hordes of creatures or as he describes, “A total adrenaline state”.

Octane-induced “Rebels” featuring Audiobullys opens the musical selections with a hectic drumbeat and East Indian flavour meant to keep the dancefloor bouncing with repetitive chants and a crescendo of electronic haze. Similarly “Pop It” featuring Lil Debbie blends an East Indian flare with an urban groove.

Time will tell if this frenzy of beats will establish itself as a mainstream of house music – until then spin this if the natives get too restless.

An educator who also tries to introduce others to great music. It's a never ending job.
RELATED ARTICLES
album reviewsowslaskrillex
8.0