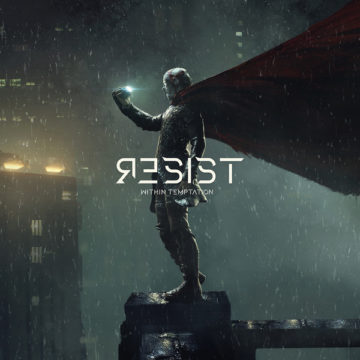 Dutch metal powerhouse Within Temptation is back with their seventh studio album, Resist. The new release, its first since 2014’s Hydra, comes after a four-year hiatus that surprisingly almost led to the band’s breakup. After collectively deciding that it had reached the limits of its traditional orchestral sound and classic metal riffs, the band needed a new direction. Resist is the result of that: a rough yet polished futuristic album that is still chock-full of the deeply resonate and powerfully anthemic tracks that Within Temptation fans love.

Resist is a call to arms and a battle cry against government powers. These 10 powerful and beautifully-crafted tracks fit perfectly into Within Temptation’s discography. The classic orchestral sound may be gone, but there are hints of apocalyptic choir verses, and lead singer Sharon den Adel’s signature operatic voice still soars to hit ethereal high notes in “Raise Your Banner”. Adel’s voice, paired with backing vocals from Anders Fridén of In Flames, makes this song a definite standout.

Within Temptation are wise in selecting “The Reckoning”, featuring Jacoby Shaddix from Papa Roach, as the album’s opening track. With the unique intro, which bares resemblance to a horn call, the band immediately grabs the listener’s attention, and holds it for the course of this well-crafted song with a highly infectious hook.

Another standout on Resist, and a hidden gem at that, is the demure and understated “Firelight”, featuring Jasper Steverlinck of Arid. The tune behind this dark and haunting ballad is pulsating; its repetitive nature lingers long after the song is over. The lyrics here are also beautifully poetic and rich in imagery. Together, Adel and Steverlinck’s voices are pure magic.

With this new direction, Within Temptation has crafted its strongest album to date, far surpassing the majesty of Hydra. “Resist” is richly nuanced and incredibly powerful, and will surely make for an impressive live show.

Samantha is both a writer and a fan of the arts and has been able to find numerous ways to pair the two. Eager to dive head first into writing for Spill, Samantha is an avid partaker and reviewer of live art in Toronto serving as an editor at Mooney on Theatre exploring live local theatre, she's a photojournalist for Been Here Done That, a travel, dining and tourism blog that focuses on Toronto and abroad and previously for Lithium Magazine. She's passionate about music, theatre, photography, writing -- not necessarily in that order. She drinks tea more than coffee, prefer ciders over beers, and sings karaoke way too loudly. You can follow her on various social media including Facebook, Twitter, and Instagram.
RELATED ARTICLES
album reviewalbum reviewsresist
8.0