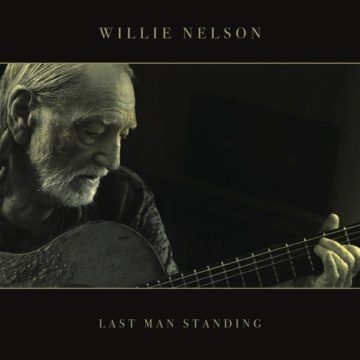 A song writing legend who needs no introduction, Willie Nelson returns with his sixty-seventh solo record, Last Man Standing. In what is without a doubt a truly incredible and expansive discography from a man who – when counting the thirty-four collaborative records – has more albums to his name than years to his life, Last Man Standing shines as a welcome addition to Nelson’s catalogue.

Opening with the title track, Nelson humorously jests about life and death, singing “I don’t wanna be the last man standing, on second thought, maybe I do” over a bouncy boogie-woogie blues. The track pays tribute to some of Nelson’s friends who have passed, including outlaw legend Merle Haggard who passed away in 2016, while also wondering which of his friends will be next. Only Nelson could take such morbid contemplation to such an upbeat and mildly cheerful place. The theme of life and death is deeply intertwined with the album and it is almost always confronted with Nelson’s sharp wit and appreciation for life. For example, on “Bad Breath” he states “Bad breath is better than no breath at all”. It is such a sense of humor that allows for Nelson’s character to shine bright in his work, giving his excellently written songs a personality that few others could manage, especially when considering the difficulty of the subject matter.

Musically, Last Man Standing rests confidently in a space that included strong elements from country, folk, the blues, and even hints of jazz. “Ready To Roar” for example sounds like walking into a bustling New Orleans pub on a Friday night to find a full band jamming over Nelson’s acoustic shuffle and warm vocals, while “I Ain’t Got Nothin’” takes the shape of a driving country rocker. The album closes with one of its strongest tracks, “Very Far To Crawl”, a darker track that features subtly weaving guitars and harmonica in a way that, despite its simplicity, feels very sophisticated and tasteful.

Last Man Standing is an incredible collection of eleven songs from one of America’s greatest songwriters. The record is a reminder to the musical relevance of Willie Nelson in his near six decade long career and if Last Man Standing is any indication, there are still plenty of songs to be written.

A passion for music has always been a part of Gerrod’s life. As a young boy, he was raised on a steady diet of the music from The Chili Peppers, Aerosmith, The Stones, Prince, and others from his mum. Raised in the GTA, Gerrod continued to foster his love for music by attending a wide range of concerts and learning the drums. His unapologetic passion for music has no bounds and has spread to a wide variety of styles, whether it be the 90’s rock that sound tracked his teenage years, the jazz he studied in university, or his newfound love for hip-hop. He recently received his bachelors in music and education from York University and is passionate about writing and reviewing good (and less than good) music. Gerrod is also the drummer and songwriter for a Toronto based rock & roll band, One In The Chamber.
RELATED ARTICLES
album reviewslegacy recordingswillie nelson
9.0