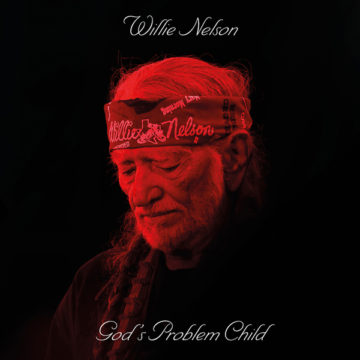 There is nothing worse than musicians using the word “just” in describing their sound. “We’re just a rock band”, “we’re just a blues trio,” or “I’m just a folk singer”, are all summaries echoing throughout every record store and guitar shop in America, in response to the question of “What kind of music do you play?” Artists or groups who describe themselves so ambiguously are typically quite dreadful; they strive to create music which fits perfectly into a box which someone else created, and thus, offer nothing of substance or soul. However, Willie Nelson’s newest release, God’s Problem Child, is an exception to the rule, for it can be appropriately addressed as just another Willie Nelson record, and there is nothing wrong with that. The future candidate for country music’s Mount Rushmore does nothing to defy expectations on his newest work, putting all the Willie charm the world has come to expect into thirteen new songs. He covers Willie topics in his own Willie way and brings his old friend Trigger along for the ride, scratching that Willie itch his fans never lost.

God’s Problem Child gets to business straight away. “He Won’t Ever Be Gone,” an ode to his recently deceased friend Merle Haggard, starts the album off in an abrupt yet appreciated manner. Willie forgoes a typical building block opener and in favor of addressing the topic which is closest to his heart first. It’s an incredibly Willie move, and acts as reassurance that the country legend has yet to sell his soul to the business which has become of music. Further proof of Nelson’s steadfast individualism can be found on “Still Not Dead,” a track which covers Willie’s false death reports on the internet. The topic may be considered a risk in the mind of country purists, as classic country instrumentation doesn’t seem like it would mix well with 21st century technology, but Willie knocks it out of the park with his signature delivery.

The mix is no issue on this album, every song sounds great. The instruments all have a chance to breathe and Willie’s voice sits in the mix well. The stand out instrument on the record is by far the nylon rhythm guitar, which more than likely comes from Willie’s well worn gut-string Martin, “Trigger.” The nylon twang gives a special feel to the fills on “I Made a Mistake,” and the final notes of “Delete and Fast Forward,” which Willie plays rapidly in a gypsy jazz style, channeling his inner Django Reinhardt. One can’t help but be impressed by the duo.  Nelson released this album at age 83 and the key shaped hole in the top of Trigger isn’t getting any smaller. Yet, Nelson still plays with the same energy, delicacy, and passion as he always has.

God’s Problem Child will not make Willie haters change their opinion, nor will it appeal to new listeners who have become jaded by the nature of the modern music. These days, artists are expected to push boundaries in the name of staying relevant, and stagnation often leads to dismissal. Nelson waves this ideology by on the highway and screams out the window “go around!” While this ethic is highly admirable, as most of us could stand to slow down in the world of reality TV presidents and new iPhones every other day, listeners will struggle in not comparing Willie’s latest to other 2017 releases which have strived to change the world like Father John Misty’s, Pure Comedy. Nonetheless, God’s Problem Child deserves at least one play through for any music lover. It will satisfy Willie’s fans, it’ll win him some new ones, and those who don’t appreciate Willie will at least get some insight into a legend of music history.

Here's what we think...
Spill Rating
Fan Rating
Rate Here
New Criteria
10
7.3
8.0
Total Spill Rating
7.3
Total Fan Rating
You have rated this
Album Reviews
album reviewsgod's problem childhe won't ever be gonelegacy recordingsstill not deadwillie nelsonyour memory has a mind of its own
album reviews, god's problem child, he won't ever be gone, legacy recordings, still not dead, willie nelson, your memory has a mind of its own
About the Author
Dan Shust

The Spill Magazine is a Toronto-based online publication dedicated to covering the independent music scene with a strong focus on our thriving hometown talent. Our writers bring you up-to-date news, in-depth features on musicians and reviews for the latest CD releases. We also travel to the front lines for all local festivals including Canadian Music Week and North by Northeast. Don’t forget to check out our Facebook and Twitter pages for all daily Spill updates.
RELATED ARTICLES
album reviewslegacy recordingswillie nelson
7.0