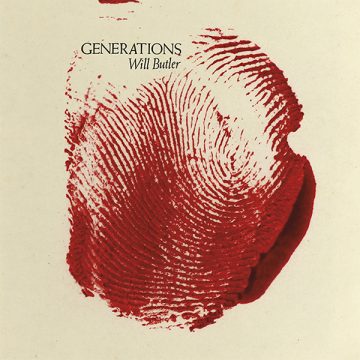 Will Butler is a busy man. It’s been five years since the release of his solo debut album Policy (2015), but in between he also released Friday Night (2016), an energetic live album, and as a member of Arcade Fire he helped record and release the stellar Everything Now in 2017. Somewhere in there, he also earned a public policy degree from Harvard (Harvard!) as well as hosted a series of town halls covering such topics as prison reform and voting rights. Did I mention he also has three kids? Nonetheless, working mainly from his basement in Brooklyn, his latest album Generations (2020) shows no signs of him slowing down, and is full of playful, high-energy, guitar-driven indie rock that is rich in detail and reveals a solo artist with a distinct vision for himself outside of his highly successful band.

As a part of Arcade Fire, it’s tempting to think that Will Butler might sound a lot like the band from which he is stepping briefly out of, but while there are some undeniable similarities of sound, the two are not the same.

Opening track “Outta Here” starts subdued and quiet but quickly builds up into a thumper, the refrain of “had enough bad news/I’m gettin’ out of here”, building in intensity with each repetition, as if the speaker is gaining the conviction to actually go ahead with leaving. Early single “Close My Eyes” confronts a world in disarray as the familiar lilt of Butler’s voice sings “I got to dance to keep from crying/my head is tired, my eyes are weak/my heart is sad, but I can’t speak,” and there are even little glimmers of Will Butler the crooner in there before it swings back up into the grander sonic stylings reminiscent of his more famous band.

While much of those echoes are welcome for many people, a track like “Surrender” (and many others) is where he is able to distinguish himself by being a little more rough around the edges than the more richly polished band he is a part of. “Surrender” is a spirited, gospelly, call-and-response song that seems to pick up speed and pace and energy the whole time, successfully managing to capture the high energy and playfulness of his earlier live album. In fact, many of the tracks on this collection fit that description, starting with a beat or a sound and then building up around it quickly. One exception is the closer “Fine,” which is a slower, more somber song in which it’s possible to think perhaps Butler has at last run out of energy.

Overall, this is an impressive album from an impressive human being. It’s both fun and finely tuned when you put your ear close to it, and while the craft and experimentation associated with Arcade Fire is certainly present, the energy here is different. Things here are slightly wilder and more profuse, a foaming craft beer instead of a fine liquor, and much more Will Butler than anything else.

Dan Kennard is an English teacher and fiction writer living outside Kansas City, Kansas where he lives with his wife and children. More about his work can be found at amazon.com/author/dankennard. You can also follow him on Twitter and Instagram @kennardistry or contact him at kennardistry@gmail.com.
RELATED ARTICLES
album reviewalbum reviewsarcade fire
10