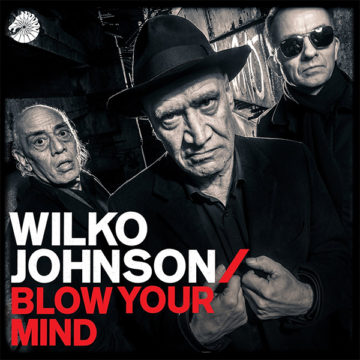 In 2014, much to everyone’s surprise, Wilko Johnson, who was handed a death sentence of a year in 2013 due to terminal pancreatic cancer, released an album with Roger Daltrey (Going Back Home) that made the top three in the U.K. and went gold. It has been four years since that album, and Johnson is still with us, and due to a third operation, has been given a cancer-free diagnosis. Blow Your Mind is his first album of all new material in 30 years and it is so good to have him back.

Working with his band, which he formed in 1990, Johnson has put together a solid, rock ‘n’ roll album. Norman Watt-Roy (Nick Cave, Nick Lowe, Ian Dury and The Blockheads, to name just three) provides some powerful bass licks, while Dylan Howe (Paul McCartney, David Gilmour, Ray Davies among many others) matches him perfectly with his solid and steady drumming. Add in Johnson’s guitar, and this is a powerhouse trio. There is no showboating, or fighting over the spotlight, this is a tight unit that forms a perfect sound. Assisting on the album is Steve Weston on harmonica and Mick Talbot (Style Council) on piano.

A great deal of credit goes to producer Dave Eringa, who lets the band get on with their sound, and manages to capture their energy throughout. The songs may sound basic, but it is due to Eringa’s ability and talent that the songs have that sound that blends old with current sound. I must say, however, that it cries out to be on vinyl. And listening to the streaming of the album, you can pinpoint side one and side two. Each side is sequenced for maximum enjoyment.

Johnson does not keep away from the topic at hand, i.e. his impending death. Listen to the lead off single, “Marijuana”,

“Feels so good, down here in my misery,
Man, I just sit here thinking this, thinking that,
Thinking just one last thing and that’s the end of me.”

Or listen to “Take It Easy”, with the lyric “Though well I know my time ain’t long/Close your eyes, I’m almost gone.” Not the stuff of typical feel good, rock ‘n’ roll lyrics, yet Johnson pulls it off. These lyrics set to the grind of the music and it is perfect. Finally, tune in to the beautiful “Lament”, where Johnson does not need words, he lets his guitar say everything that needs to be said. Just prepare yourself for a complete emotional roller coaster.

But Johnson does not feel bad for himself. Not at all, he is too busy playing with his mates and putting together some bluesy rock ‘n’ roll to be overly concerned with mortality at this point. He is having fun and his guitar playing and remarkable vocals are all testaments to that. Blow Your Mind is an incredible album. Whereas most artists reflecting on their demise may be somewhat sombre, Johnson and his friends are celebrating life and sound content to stay in the moment. There are no answers on this album, no secret insight into the condition of a dying man, but there is honesty, rock ‘n’ roll and 12 of the finest songs you are going to hear this year. A fantastic accomplishment!

Born and raised in Whitby, Aaron discovered music through his love of The Beatles. This led to a career in radio, writing for various publications, and ultimately a radio show about The Beatles (Beatles Universe), which ran for over four years. When not immersed in music, Aaron enjoys spending time with the loves of his life -- his wife Andrea, and daughters Emily and Linda (all of whom have an intense love of music too).
RELATED ARTICLES
album reviewalbum reviewsblow your mind
9.0