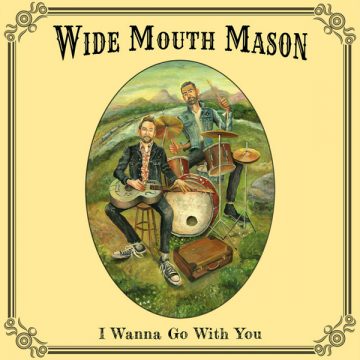 Wide Mouth Mason have reinvented themselves on their latest album I Wanna Go With You.

No one expected this legendary two-time Juno-nominated rock band to drop a blues album. Now, they have done just that!

These Canadian prairie boys made waves in the late ‘90s when Canadian rock was at its peak. They even toured with AC/DC, ZZ Top, and The Rolling Stones well into the new millennium, and secured their spot as one of Canada’s most popular bands. That makes their switch to a blues-centred album that much more spectacular.

Kicking off with the toe-tapping track “Bodies In Motion,” the album is a brilliant collection of the best Wide Mouth Mason has to offer. For fans of their older stuff, like their well-known “Why,” the song “Anywhere” contains many of the same elements. However, Wide Mouth Mason has always had a bit of a blues flare just under the surface of their music. So it’s really great that they took this full dive into a genre that really suits them on so many levels.

Then they tackle David Bowie’s “Modern Love.” This ear-worm is absolutely addictive. Their blues approach to the song give new life to this classic. It’s not to be missed.

Really the entire album is not to be missed. It’s fun, fresh, and a crowning achievement for this beloved band.

Samantha “Sam” Stevens is half a music journalist, and half an academic scholar. With a graduate diploma and MA in Journalism, Sam has covered musicians all over the world and her work has appeared in Guitar Girl magazine, North Bay Nugget newspaper, The Link newspaper, and a few others. She even founded and managed her own music blog The Littlest Voice for 5 years, in which the spotlight was thrown on new and emerging indie artists around the globe. Currently, Sam is a PhD student at Carleton University in the School of Indigenous and Canadian studies where she is continuing her MA research on colonial language in Canadian news and government institutions.
RELATED ARTICLES
album reviewalbum reviewswe are busy bodies
6.0