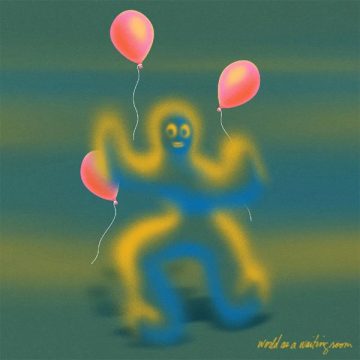 In the midst of Austin’s stay-at-home order, the four members of White Denim devised a plan to record a full-length album, their 10th, in 30 days. After a week at the band’s Radio Milk studio, they completed World As A Waiting Room.

The album gets going with the addicting, fast-paced opener “I Don’t Understand Rock And Roll”. An ode to being stuck inside, it is beautifully led off with the line, “So your summer came early/All the streets are empty/And no one’s dancing”. Petralli is frantic, taking refuge in rock ‘n’ roll, but inviting us into a place in the unknown. A cold ending leads into “Matter of Matter”, he is sultrily singing on a fleeting tempo. His riffs are traded with Michael Hunter’s keyboard lines. The guitar rocker is exciting, fast, and full of effects in each section.

A rooster crow leads off the 6-minute-26-second shoegazy rocker “Work”. It’s this song that captures the tight window the album was conceived in balanced with the drive to–work. The desperation in Petralli’s vocals speaks volumes, almost finding a welcome distraction in creating music.

The super relevant “Queen of the Quarantine” turns our new normal into an exotic, cloudy love poem, a tribute that’s half adoration, and half disbelief at what’s become normal. It’s lighthearted, with couplets like “And doin’ my best to maintain my healthy distance/But I’m keepin’ her close.”

In the small time frame the band had to come up with Waiting Room, the group managed to create a time capsule of the distorted reality we’re existing in. Self-described as a companion piece to 2010’s Last Day of Summer, it’s a document of a surreal time to live in, where “Queen of the Quarantine” and “Slow Death” are normal song titles, and “don’t want to mix with your dirty spit” and “I don’t understand” is a normal thing to say over and over again.

King Dawit considers himself the Psychedelic Cowboy. Raised on The Beatles, Queen, The Rolling Stones, and Crosby, Stills, Nash, & Young, you will never find Dawit listening to the same thing two days in a row, whether it be '70s progressive rock or late '60s Baroque pop. Dawit is also a Toronto-based writer, filmmaker, and music producer. Among his favourite writers are Hunter S. Thompson, Terry Southern and Lester Bangs.
RELATED ARTICLES
album reviewalbum reviewswhite denim
8.0