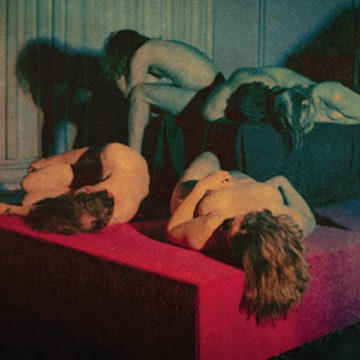 It’s a handy little tag, to refer to a band using the statement, “If Joy Division were female-fronted and Belgian”. One certainly gets the concept right away, and the comparison is well founded. Image, the debut album from Whispering Sons, employs staccato guitars, layered synths, programmed percussion, and haunting vocals – all of the elements that would place their sound firmly in the late 1970s post-punk era. This is their jumping-off point, but in many ways, Whispering Sons take the sound and genre to new heights.

Recorded over a tight and immersive ten days in the studio, Image presents a cohesive sound and a worldview that deals with issues of isolation, existentialism and mental health. These themes are revealed with sonic urgency through darkly ominous songs. But there’s no need to be afraid of the dark. These songs are remarkably energetic and hook-filled, drawing the listener in at every turn. From the intro of Image’s first track, “Stalemate”, one is compelled to take notice of the song’s odd catchiness and hypnotic drive, as Kuppens sings the lyrics: “As roads collide and I with them/Madness manifests itself/Though I feel alive for an instant/Numbness is closing in”.

The songs on Image were written after Whispering Sons relocated to Brussels in 2016. Their move to the city contributes to the album’s moods of alienation and distance. In the hypnotic and powerful song “Got A Light”, Kuppens sings the repeated refrain, ‘How are you feeling? Good.’ By the song’s end, this phrase has morphed into the existential question ‘How are you feeling good?’

With a consistent sound throughout, and expert production by Micha Volders (producer) and Bert Vliegen (co-producer/engineer), Image is an excellent album. The band keeps driving the songs forward, and big lyrical questions keep being asked. With their artfully unified musicianship, this band does more than simply pay homage to a classic sound. We have seen the future of post-punk, and its name is Whispering Sons.

Bryan Williston has been involved in music since he was a young child. A veteran singer, songwriter, and music educator, Bryan has enjoyed playing a multitude of musical genres in a variety of outfits, over the years. Bryan lives in Whitby, Ontario.
RELATED ARTICLES
album reviewalbum reviewsalone
9.0