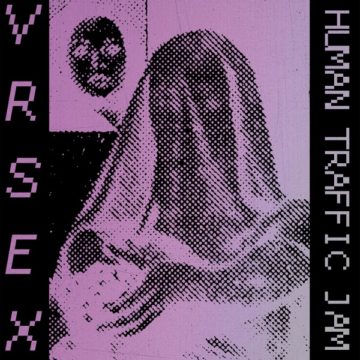 VR Sex is a provocative band name. I suppose this outfit will be more famously known as a “Drab Majesty side-project” than as a band in their own right.

On the surface, this is is way more dense and dark than you’ll find on any Drab Majesty release, so don’t be looking for their brand of ‘Dream Pop/Shoegaze/whatever’ here. There are echoes of Primary Colours-era Horrors (“Facts Without Faces”), beats that are not far from The Land of Rape and Honey by Ministry (“Downgrade”) and ambient “found vocal” tracks reminiscent of Bill Nelson or Public Service Broadcasting (“Psycho Cybernetiks” and “Cheek Detritus”). These influences are not there for mere homage, they feed into the narrative theme that Skum has laid out; the domination of technology with social media and the loss of human interaction. It’s Sci-Fi veneer but it’s hitting close to the mark of our times. I’m sure if I analyzed the lyrics more (hard as they are to distinguish in the mix sometimes) I could quote some to define more clearly the seedy undertones but you can see some of that in the video below for the second single from the album, “Sacred Limousine”. The first single, “Surrender”, is straight up old school Goth à la Red Lorry Yellow Lorry with a hint of Drab for a sublime finish.

This is a brilliantly executed amalgam of styles, genres and influences mixed together to form a thick and brooding album not easily digestible in one sitting. This is definitely a ‘grower’ type album. It is the aural equivalent of going to an “all you can eat” restaurant with the cuisines of the world and putting a little of everything on your plate. Fulfilling, a little confusing, everything’s running together…then ultimately very satisfying when you digest it.

Michael Mitchell's love of music started at an early age and slowly became an addiction that courses through his veins to this very day. It is guaranteed that if you are in his proximity, he will try to get you to travel to the nearest record store and make you buy beyond your means. His wife and two children acknowledge his problem and continue to encourage him into rehab. He currently writes for Torched, Stereo Embers, God is in the TV, ReGen and Spill magazines.
RELATED ARTICLES
album reviewalbum reviewsdais
8.0