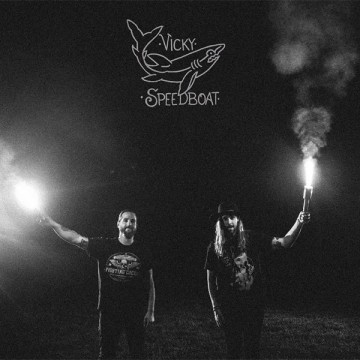 More than halfway through Two Years No Basement, vocalist/guitarist Will Lindsay declares “I tend to fall in love at first sight/ two or three times a night.”

Vicky Speedboat writes heart-on-its-sleeve songs about the road, celebratory alcoholism, loneliness and late nights lasting stretching into early mornings.
And then doing it again the next night.

The only thing missing from this Kerouacian adventure is the part where the DTs catch up to them and it turns into The Lost Weekend.

Aside from the occasional wince-inducing pop-punk missteps, Vicky Speedboat writes really good angry young white guy music. If you’re over 35 and have children and/or a mortgage, you’re either going to scoff and roll your eyes at this record, or live vicariously through it, and the band seems more than happy to embrace the crowd that fits into the latter category and offer to take them out for a drink or 12.

The duo’s energy never wanes across the 24-minute release. Filthy slabs of feedback occupy the space between the songs, keeping the band’s red-eyed mini-opus chugging along. From the opening chords of “Philadelphia Contact High” right through the guitar hero solo and group shout coda of “Weathering Bell” the band pounds its way through songs about pills, sleeping on floors, and teaching someone how to play “Seven Nation Army.”

Much like their predecessors, Japandriods, Vicky Speedboat sounds like it’d be a hell of a live band; you can feel the humidity and smell the vinegar that only a raucous punk show in a lousy dive bar can emit. And Lindsay and vocalist/drummer Sean Huber have the chops to prove it; coming from well established pop punk bands W. C. Lindsay and Modern Baseball, respectively.

Yeah, maybe sometimes things get a little too saccharine and name drop-y (e.g. the reference to C.S. Lewis in “Tequila Reluctant”), but for the most part, Two Years No Basement is a fun, catchy siren song album for recovering alcoholics.

At its best, Vicky Speedboat skips down the delicate line between punk and classic rock. At their worst, they churn out palm-muted hokey pop-punk songs like “Passing Through Wales,” the soundtrack to a super soaker battle.

Marko Woloshyn is a Mississauga-based writer and musician. He owns a limited edition repressing of Mclusky Do Dallas and one time at a concert a drunk woman told him he looked like Keira Knightley.
RELATED ARTICLES
album reviews
10