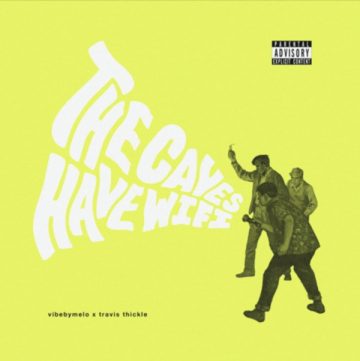 VibeByMelo is back with another quality album. Paired with Ottawa-based producer Travis Thickle, the two artists find their own lane creating a catchy project with conscious hip hop influences.

The Toronto rapper is great at creating a party atmosphere. His personality really stands out on “Throw it Up” as he raps vividly about style and social gatherings. This song is an earworm and will get stuck in the your head.

“Tell me” is another chill-hop number but deals with more serious subject matter as depression and death. The nostalgic piano keys in the instrumental beautifully accent Melos somber bars, and when the rapper says “I’m safe” during the intro, we’re reminded of what’s important in life.

“Kinda New” and “Busy” explore more accessible pop rap sounds. Midway through “Busy”, however, the beat does a hard 180, turning into a grimy industrial song. This off-kilter track is super entertaining and one of the finest moments on the album.

The ominous sounds continue on “Get it” which finds VibeByMelo spitting braggadocios bars over some eerie trap production, demonstrating Melo’s confidence as a lyricist.

Both VibeByMelo and Travis Thickle dip into different pockets of hip hop on this album. There are radio-friendly songs, introspective moments, as well as some pretty hard bars featured here. It’s a really fun listen. Go ahead–stream it from your very own cave.

Cory is a film maker and music lover raised in the GTA. Ever since a young age music has been a big part of Cory’s life and he often combined his love for music and film together, creating videos of him and his friends skateboarding to their favourite songs. This trend continues in his life as everything he surrounds himself with is always involved with or inspired by music.
RELATED ARTICLES
album reviewalbum reviewsthrow it up
8.0