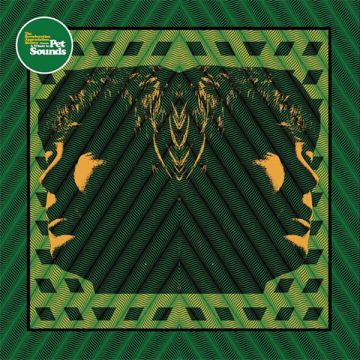 Before the Levitation Festival in Austin, Texas was cancelled, it was set to feature a performance by legendary Beach Boy, Brian Wilson in honor of the 50th anniversary of the universally acclaimed Pet Sounds album.

Prior to the cancellation, the events’ curators, The Reverberation Appreciation Society’s, made a compilation Pet Sounds tribute album featuring various indie artists. With the exception of two bonus tracks (“Good Vibrations” and “Hang On to Your Ego”) the album features covers of all 13 tracks on the original record.

The album opens with the mellow, reverb drenched guitar of The Black Angels which slowly morphs into an incredibly laid back version of “Good Vibrations”. While there are some dense harmonies here, it bares more resemblance to Camper van Beethoven than the Beach Boys, which isn’t necessarily a bad thing. It shows that this isn’t just a replica of Pet Sounds, it is it’s own unique animal. The take on the songs’ bridge is particularly unique and possibly even trippier than the original.

Once the fuzzed out guitars of The Black Angles fade away, the official Pet Sounds track list begins with Indian Jewelry’s take on “Wouldn’t It Be Nice”. It’s dark, dense, and of course soaked to the bone in reverb. Its post-punk vibe takes the listener down a totally different road than the psychedelic Black Angels’ “Good Vibrations”.

Other notable covers on the album are the quirky interpretation of “You Still Believe in Me” by The She’s, Morgan Delt’s lush take on “Don’t Talk (Put Your Head on My Shoulder)” and Shannon & the Clams zany version of “I Just Wasn’t Made for These Times”.

Though it is Holy Wave’s take on “That’s Not Me” that takes the cake here. It is the only interpretation that could begin to rival the original material, although it does fall a tad short. It’s dense harmonies, jangly guitars and lush layers are about as close to the original genius of Brian Wilson as an artist can get.

The album’s strength comes from the various interpretations of these classic pop tracks, with each artist bringing their own vibe to the originals. From post-punk to surf rock to psychedelic pop, this compilation is filled with a plethora of trippy soundscapes.

The Reverberation Appreciation Society should be very pleased with themselves as they’ve made an excellent tribute compilation to one of the greatest albums of the 20th century. While it’s safe to say it’s impossible to remake Pet Sounds and have it come close to the brilliance of the original, this compilation is a great effort.

As a child growing up in the suburbs, Ryan found music as a way to soothe his boredom. After first hearing AC/DC at the age of 10, he was hooked on music. Tracing its roots to the ‘50s, he became obsessed with Elvis, Buddy Holly and Chuck Berry. Somehow that led to grunge, then psych-rock, then jazz, etc. The list goes on and on and his collection of vinyl records continues to grow.
RELATED ARTICLES
a tribute to pet soundsalbum reviewsholy wave

by SPILL NEWS on April 25, 2017
WILL SMITH & DJ JAZZY JEFF ANNOUNCE FIRST EVER UK SHOW AS PART OF LIVEWIRE FESTIVAL 2017 OTHER ACTS INCLUDE THE JACKSONS, PETE [...]