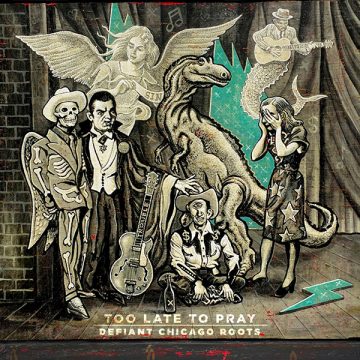 Bloodshot Records emerged on the scene 25 years ago, aiming to be a bridge. What is soul is bluegrass, what is punk is folk, what is pub rock is rockabilly. The sounds could be mistaken for a dimly-lit tavern, the kind soaked in a good country lager, someone hammering away on a honky tonk piano on the sawdust.

25 years later, Bloodshot celebrates the milestone by revisiting the concept of their first release: the multi-artist For A Life of Sin, Insurgent Chicago Country. From recognizable names like Robbie Fulks and The Mekons’ Jon Langford, to lesser-known Chicago staples, the box set goes every genre, branching out from the country roots all the artists grew. Even the cover, beautifully designed by Langford, evokes the mixed bag atmosphere.

Each song has its own twang, a story to tell. Augmented with a pedal steel guitar, Earp & The Free For Alls’ “The Last Honky Tonk In Chicago” is a fitting beginning, starting with a country shuffle, before moving into a hoedown. Langford brings a punkesque pub rock with “I Am a Big Town,” snarling that “Hangin’ in the air/There’s trouble everywhere.”

Bethany Thomas and Tawny Newsome, both longtime Langford collaborators, duet on the catchy stomp-and-clap romp “Dinosaur”, with high harmonies and “Ooh no”s. Los Gallos bring the catchy “Yeah Yeah Yeah”, built around a riff, in typical garage rock fashion, with the vocalist bellowing his lines, promising the listener he’ll rock and play the blues. Sima Cunningham brings the tender “Weeds and Daisies” highlighted by flourishes of piano, leading to an absolutely gorgeous middle eight where a chorus of voices harmonizes on top of the lush guitar.

The collection takes on some covers, as ROOKIE brings an amazing indie-fueled cover of Tears For Fears’ “Head Over Heels”, with just a hint of Western feel. David Bowie’s debut single back in 1964, “Liza Jane”, is given a garage-a-billy treatment by the reverb-soaked Dyes. “I Gotta Have My Baby Back”, a Floyd Tillman cover, has just a pleasing sound, sung by the sultry Bloodshot mainstay Kelly Hogan. Led by a pedal steel guitar, Hogan’s delivery is augmented by an organ and bombasic drum. The Chicago/Kentucky-based favourites Freakwater duet on a banjo-heavy “Sway” by The Rolling Stones.

It’s only fitting that the collection finishes with another cover, The Handsome Family’s take on “Tower of Song” by Leonard Cohen. Their interpretation is a hazy psychedelic that sounds like a mix between Cohen and some ‘80s synth wave band, with industrial effects fading away. It’s a great end to a compilation that proves innovation in an age-old genre isn’t impossible. Synth strings give it a Baroque feel, while retaining the twang that makes it so folksy.

Like any compilation, Too Late to Pray requires repeated listening. Packed with gems that pop up on the second or third listen, Bloodshot celebrates its anniversary the only way the long list of acts that grace the tracklist knows how, by song.

King Dawit considers himself the Psychedelic Cowboy. Raised on The Beatles, Queen, The Rolling Stones, and Crosby, Stills, Nash, & Young, you will never find Dawit listening to the same thing two days in a row, whether it be '70s progressive rock or late '60s Baroque pop. Dawit is also a Toronto-based writer, filmmaker, and music producer. Among his favourite writers are Hunter S. Thompson, Terry Southern and Lester Bangs.
RELATED ARTICLES
album reviewalbum reviewsbloodshot records
7.0