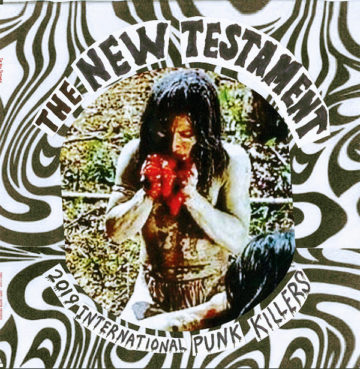 Whether you’re an angsty teen looking to frighten your uptight parents or an aging punk who refuses to sell out to the corporate lifestyles, Dirty Water Records’ roster is certainly the place to look for new music. Stating it better than I ever could, their press kit reads “Sick of wimpy indie kids prodding limply at pedal boards? Into hard drugs and cannibalism? Wanna punch a cop? Well kids we’ve got the record for you!” The New Testament, their latest compilation, consists of the work from six bands from the vintage and grimy Dirty Water roster – The Cavemen, Black Mambas, The Scanners, The Fadeaways, Les Lullies, and Nave Nodriza–with each artist contributing two tracks to round out a solid twelve-song sampler which showcases some of the best punk bands you’ve largely never heard of.

Opening with the punchy riffs of Black Mambas’ “Up All Night”, The New Testament kicks off with a catchy and rhythmic flurry of notes which feels reminiscent of ‘50s rock that’s taken a bump or two. “Up All Night” is the perfect introduction to The New Testament before diving into The Cavemen’s “My Baby Knows”, a deranged and distorted wall of unrelenting sound from my favourite band off the Dirty Water Records roster.

As the album continues, bands like The Scanners, The Fadeaways, Les Lullies, and Nave Nodriza further establish the balls to the wall, hard-hitting, ‘70s punk style of Dirty Water Records. Of these bands, I particularly enjoyed “I’m Useless” and “Nowhere To Hide” by The Fadeaways, who sound like a fuzzy, dirty, and aggressive Rolling Stones should they have grown up in the heart of New York on a steady diet of The Stooges and The Velvet Underground, along with Nave Nodriza’s “Muérete, which felt reminiscent of the hustling pulse of 45 Grave’s “Black Cross”. That being said, both The Cavemen and Black Mamba steal the show, bookending the album with the first and last two tracks, with a special shoutout to the concluding track, “Too High To Die” by The Cavemen, a song which sounds as if it was pulled straight from The Stooges’ songbook.

The future of Dirty Water Records is certainly bright, if The New Testament is any indication. While it will leave fans of the label’s current output looking forward for what is to come from its artists, the compilation album should ring as exciting, fresh, and dangerous. Should you consider yourself punk, or even mildly interested in the genre, The New Testament should most definitely be on your current rotation.

A passion for music has always been a part of Gerrod’s life. As a young boy, he was raised on a steady diet of the music from The Chili Peppers, Aerosmith, The Stones, Prince, and others from his mum. Raised in the GTA, Gerrod continued to foster his love for music by attending a wide range of concerts and learning the drums. His unapologetic passion for music has no bounds and has spread to a wide variety of styles, whether it be the 90’s rock that sound tracked his teenage years, the jazz he studied in university, or his newfound love for hip-hop. He recently received his bachelors in music and education from York University and is passionate about writing and reviewing good (and less than good) music. Gerrod is also the drummer and songwriter for a Toronto based rock & roll band, One In The Chamber.
RELATED ARTICLES
album reviewalbum reviewsdirty water records
9.0