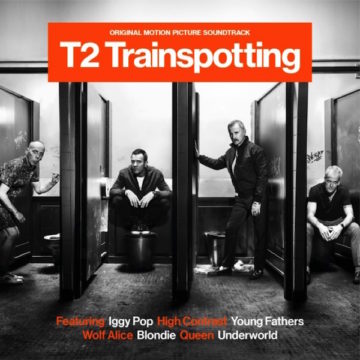 I don’t envy the writers/producers of T2 Trainspotting.  They have a lot to live up to as do the producers of the soundtrack.  The first movie, Trainspotting, spawned two CDs worth of songs.  Both CDs are incredible collections of old and new songs.  Some from the film, some “inspired by” the film.  The thing is, they were both great collections.

I am making an assumption that if you are reading this, you are familiar with the original Trainspotting from 1996.  A gritty Scottish film about heroin addiction.  The soundtrack proved to be the breakthrough for Underworld (“Born Slippy” was featured on that soundtrack) and the soundtrack went on to sell truckloads, especially in the U.K.

Here we are with the sequel.  I have not seen the film (yet!) but I know that sequels have a very hard time living up to the original (hence, the reason I do not envy the makers of T2)  In terms of the soundtrack, they have done a bang up job.  Once again, a wonderful collection of diverse songs from the 1970’s punk era. The Clash with “(White Man) in Hammersmith Palais”) to 80’s rap Run DMC, “It;s Like That” to 80’s ‘new wave Blondie with the essential and incredible “Dreaming” right up to the 90’s Young Feathers.

Underworld are back with two ‘new’ songs, or rather mixes, which are stand outs.  “Slow Slippy” is worth the price of the album alone (for fans, there is a wonderful 12 inch remix single available that  I highly recommend).  “Eventually But (Spud’s Letter To Gail)” features Underworld’s atmospheric music with Ewen Bremmer’s beautiful reading of a letter, not to be missed.  The Rubberbandits also come up with an amusing song “ Dad’s Best Friend” and Iggy Pop is represented by a new remix of his classic “Lust For Life (The Prodigy Remix)” which does little in improving the original song.  I would have rather they just used the same song again.

Some curious additions had me scratching my head (mainly Queen’s “Radio Ga Ga”) but I guess they all come together in the movie.  But the low moments for this collection are few and far between.
As an album it does hold together as a a collection for the most part.  Think of a mix tape and trying to touch on as many styles of music as possible from the past 40 years.  It is all subjective, there were songs that I would have rather seen, and some that I could do without.  Overall, a good album, one that I am sure will be on many turntables, especially during the summer.

Born and raised in Whitby, Aaron discovered music through his love of The Beatles. This led to a career in radio, writing for various publications, and ultimately a radio show about The Beatles (Beatles Universe), which ran for over four years. When not immersed in music, Aaron enjoys spending time with the loves of his life -- his wife Andrea, and daughters Emily and Linda (all of whom have an intense love of music too).
RELATED ARTICLES
album reviewsblondieget up
8.0