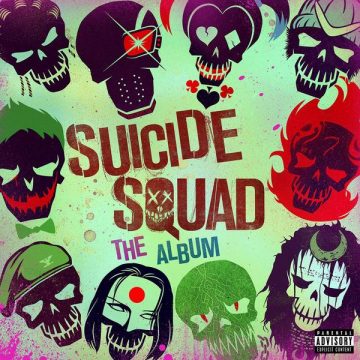 I’ll admit I haven’t seen Suicide Squad. The film opened to such poor reviews that no matter how potentially interesting the highly manufactured trailers looked, the fierce word of mouth could not be denied. Many critics have pointed out the film’s flaws; mainly its poor acting and directing alongside a predictable yet stuffed script whose substance reaches an even lesser level than the poor show of comic book adaptations we’ve been subjected to for the past few years.

The soundtrack, then, seemingly fits the film’s criticisms. In its discrete parts, it seems interesting enough, but the mixing of all these oddities amounts to a lot of irritating noise and a lack of any fundamental substance. From the start, the stadium Hip Hop collab of Skrillex & Rick Ross rambles on about “pussy” and some other godforsaken retreaded Rap lyrics about having copious amounts of money. For some reason, the collaborations continue to try too hard – Lil Wayne and Imagine Dragons appearing on the same track is about as suitable as flip flops in snow. The soundtrack’s saving graces come in the form of twenty one pilots, whose Beastie Boys-esque modern sound is a breath of fresh air. A cover of “Bohemian Rhapsody” by Panic! at the Disco is a nice little ditty that will never amount to the original (I mean, obviously) but is probably the most redeemable thing here, likely due to the fact that the source material is more inspired than anything else on this soundtrack.

After droning on from over-produced Pop to a heavy dose of angered Hip Hop and questionable additions, Suicide Squad: The Album ends up being a hard sell. For someone who hasn’t seen the film, it surely doesn’t inspire confidence. It seems that, like many comic book films tend to be these days, the tragic flaw of this soundtrack and its partner film seem to be that they are both being created for revenue instead of lasting entertainment. The problem is that even in the short term the entertainment doesn’t add up.

Robert Defina is an avid critic both on paper and in person. He spends more time writing album reviews than he does worrying about his future. He hopes that this sort of procrastination never grows old.
RELATED ARTICLES
twenty one pilotsvarious artistswarner music group
8.0