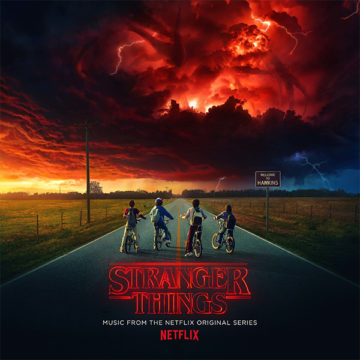 There are so many ways you can approach making an album out of an original soundtrack – from slap dash pile of anything that has an even remote connection with your movie or TV series, to a careful collection of all the key or even all tracks involved, as long as you can get a copyright. Often the approach has nothing to do with the fact of whether or not a large company or a small independent label is involved.

In the case of the soundtrack for the Grammy nominated Netflix series Stranger Things, big stakes are involved, as is a big label, Sony Legacy. The thriller/horror series, that takes place in the mid-Eighties somewhere in Indiana, has been nominated for 18 Grammys, of which one is for music supervision.

Obviously, trying to cut corners in this case was not an option. Listening to the choices from the score, that involves both the first and the second season which just started, it seems that everything was done to make it as good as possible.

Usually, an obstacle with soundtrack compilations is how to appeal to listeners, like myself, who haven’t even seen a trailer from your movie or series. That can be done by including characteristic snippets from the dialogue (check) and trying to include the music that gives an overall atmosphere of the movie or series, while still maintaining a musical thread you are trying to portray (also check).

Trying to portray a supernatural situation in a typical Midwestern US town in the mid-Eighties involves not only calling upon the fact that some of the most iconic thriller/horror movies were made in that period (Friday the 13th, Nightmare on Elm Street, Gremlins, Goonies and others), but  recreating the musical background that characterizes the period that was particularly marked by the rise of MTV, and still include some of the music/musical elements that suit the atmosphere. In this case, it seems to be one of contrast between the ordinary daily small town life and one of horror.

In the case of Stranger Things, it sounds like a complete success. From the expected rock FM radio of the era such as Bon Jovi, Cyndi Lauper, and The Scorpions et al., through tracks that practically brought MTV to its rise, such as Duran Duran’s “Girls on Film” and The Police’s “Every Breath You Take”, to some that might not have been so widely exposed at the time but certainly do fit an atmosphere of mild (or not so mild) terror, such as Echo and The Bunnymen’s “Nocturnal Me”, Joy Division’s “Atmosphere” or Peter Gabriel’s orchestral version of David Bowie’s “Heroes”.

What underlines the thoughtfulness and even hipness of the selection process is shown in the inclusion of tracks like The Bangles’ version of the Simon & Garfunkel classic “Hazy Shade of Winter”, and New Order’s “Elegia”. Certainly, The Romantics’ power pop tune “Talking in Your Sleep” and The Psychedelic Furs’ “Ghost in Me” were minor hits, but obviously fit into the series atmosphere, showing how meticulous the selection process was.

Even taken out of the context of the series, the Stranger Things OST presents quite a representable cross-selection of what the Eighties music was all about (any way you want to take it), and as such should be seriously considered by any serious music collector. Oh, yes – it does make me want to watch the series too.

Formerly a lot of things, including a journalist and a translator, currently a freelance writer living in The Netherlands.
RELATED ARTICLES
album reviewslegacy recordingsnetflix
8.0