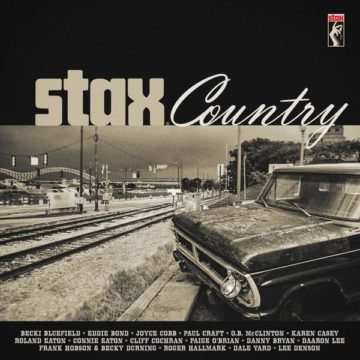 Would anyone have expected a country music album from the stalwart Southern soul label Stax? Nevertheless, while there is a history of overlap between country and soul/r&b, this release might still come as a bit of a surprise for anybody familiar with mainstream country music and/or the general output Stax has released over the decades.

The element of surprise comes from the fact that unless you are a serious country music researcher like Colin Escott who wrote the liner notes for this compilation, there is very little chance that you have heard of any of the artists, or the tracks on this album. None of the artists ever made it big, and most of the songs were never formally issued. This has nothing to do with the quality of the music or the performances presented on the album – they are all exceptionally well played and sung. They are slick and are an acoustic fit with the songs that made it big in the seventies, which was when the songs were recorded.

This might have nothing to do with the fact that the tracks were recorded for Stax which is in Memphis, rather it might have something to do with the fact that the songs didn’t originate in Nashville, which at the time, essentially had a monopoly over the mainstream country scene. The songs also don’t have much in common with the country rock that was coming out of LA at the time either, and Stax didn’t promote these artists or songs in a manner that would allow them to compete with the Nashville artists of the time.

So, are these songs really worthy of an album? That depends on whether you want to listen to some ‘real’ country music or not . More or less, the songs follow the standard country music patterns, and it is truly a wonder why for example “For Linda (Child In The Cradle) by Paul Craft or “The Finer Things In Life” by B. McClinton didn’t make it. Or any of these, for that matter. But then, it wouldn’t be Stax if the best song here is not a countrified version of The Temptations hit “My Girl” by Danny Brian. That one seems to be even perfect for current charts.

In retrospect, this compilation not only shines the light on what Stax was doing during the decades of its 60 year operation, but also as a brief overview of the state of country music in the seventies, the difference being that none of these tracks ever made it. And compared with other country music from that time, they could just as easily have made it.

Formerly a lot of things, including a journalist and a translator, currently a freelance writer living in The Netherlands.
RELATED ARTICLES
album reviewsstax records
8.0