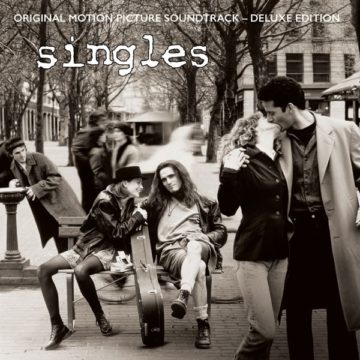 Talk about a throwback Thursday! The soundtrack for Singles, the 1992 Cameron Crowe film which sought to look beyond the over sensationalizing of grunge by the media by looking at the meaning of youth among the cultural renaissance of Seattle in the early 90’s, was just reissued for the first time ever. This exciting reissue not only sees the quintessential grunge soundtrack brought to vinyl for the first time, but it also comes with a number of unused and unreleased tracks as well, including rare material from Alice In Chains, Pearl Jam, and the recently deceased Chris Cornell.

To kick off the album is the award winning track, “Would” by Alice In Chains. The song won the MTV Video Music Award for best video from a film, and was nominated for best song from a film. Like much of this record, there is no denying the quality and raw emotion expressed in “Would”. After all, thirteen of the 31 tracks were previously released on the critically acclaimed and double platinum album in 1992. The first (original) disc of Singles: Original Motion Picture Soundtrack includes rare deep cuts of the likes of Pearl Jam’s “Breath” and “State Of Love And Trust”, Soundgarden’s “Birth Ritual”, The Smashing Pumpkins “Drown”, and The Lovemongers’ (Anne and Nancy Wilson of Heart) cover of Led Zeppelin’s “The Battle Of Evermore”. While all of these, and each of the other tracks I have yet to mention, are all great, the strongest track of the original soundtrack is “Seasons” by Chris Cornell. “Seasons” was Cornell’s first ever solo track ahead of his solo record debut, Euphoria Morning in 1999 (changed to Mourning in 2015), as well as his first venture into solo acoustic, which he would deeply explore throughout the 2000’s. The song follows a unique chord progression on an alternatively tuned acoustic guitar in which Cornell’s voices captures the joy, pain, and hope present in Seattle during the 1980s and 1990s. The song is both haunting and soothing; a line no one else but Cornell could walk so maturely.

The second disc contains eighteen never before released tracks. While this sounds super exciting, some of these songs are different versions of the final tracks that made it to the original disc, including demo versions of Mudhoney’s “Overblown” and Paul Westerberg’s “Dyslexic Heart”, as well as a score acoustic version of his “Waiting For Somebody” and an instrumental version of his “Blue Heart”. The second disc also includes a number of live tracks, including Alice In Chains’ “Would” and “It Ain’t Like That” (of which the studio version is not on the original disc), and Soundgarden’s “Birth Ritual”. All of these repeated tracks are great, serving as a treat for the dedicated and long time fans of a wide array of artists. Of this treasure trove of unearthed material lies a handful of standout tracks. The first is an instrumental number from Pearl Jam guitarist Mike McCready. “Singles Blues 1” is a loose and jangly blues number

in line with Hendrix, and classic blues musicians of the likes of Howlin’ Wolf and Muddy Waters. The song highlights the often denied connection which the grunge scene had to classic rock and the blues, in a tasteful and slinky manner. Much like how Cornell took the top spot for the most interesting track of the original disc, the second disc features six never before released tracks from the late legend. Most notably is a lo-fi rough cut demo of what would become Soundgarden’s 1994 hit “Spoon Man”, as well as demos for “Flutter Girl” and “Mission”, two tracks that would appear on Cornell’s Euphoria Mourning. Any diehard Cornell fan will love to hear the evolution that these tracks went through during the decade before their commercial release as it gives a certain peek behind the curtain to the creative genius that is Chris Cornell.

The original disc of Singles: Original Motion Picture Soundtrack is nothing short of great, but we already knew that. What is most interesting is how this collection of rarities and deep cuts has aged seamlessly, and while it is certainly distinctive to the ’90s (it is, after all, the soundtrack to a film which follows youth in the ’90s), it does not sound dated or cliché. Along with the second disc, Singles: Original Motion Picture Soundtrack becomes the essential ’90s sampler that will recapture a sense of nostalgia to long-time listeners, while also giving a younger audience an accessible entry point into grunge culture that is not through Nirvana. The second disc is especially interesting for the mere reason that it is a collection of entirely unreleased music that gives an alternative look at the creative process for so many greats from the decade. While it is something that will be enjoyed far more by ’90s grunge and alternative rock aficionados, the second disc is truly something special and makes full use of the title of buried treasure. All in all Singles: Original Motion Picture Soundtrack is a more than worthwhile trip down memory lane, especially in the wake of Chris Cornell’s untimely and unexpected death. You’ll smile, you’ll laugh, and you’ll cry, but you’ll appreciate him, and Singles: Original Motion Picture Soundtrack, more for it.

A passion for music has always been a part of Gerrod’s life. As a young boy, he was raised on a steady diet of the music from The Chili Peppers, Aerosmith, The Stones, Prince, and others from his mum. Raised in the GTA, Gerrod continued to foster his love for music by attending a wide range of concerts and learning the drums. His unapologetic passion for music has no bounds and has spread to a wide variety of styles, whether it be the 90’s rock that sound tracked his teenage years, the jazz he studied in university, or his newfound love for hip-hop. He recently received his bachelors in music and education from York University and is passionate about writing and reviewing good (and less than good) music. Gerrod is also the drummer and songwriter for a Toronto based rock & roll band, One In The Chamber.
RELATED ARTICLES
album reviewsalice in chainschris cornell
9.0