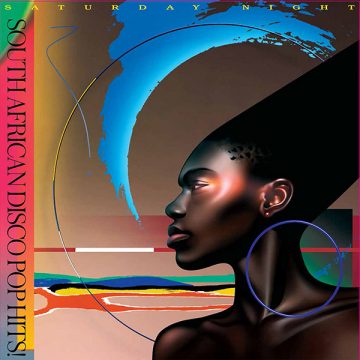 While the likes of Prince, Madonna, and Michael Jackson were capturing the world by storm, disco seemed to all but disappeared back to the clubs and underground from which it first emerged (largely thanks to a movement driven by homophobic and racist intentions). Despite this, and amidst a wave of institutionalized apartheid, South Africa was radically changing and the ‘80s reflected such vast change through a drastic shift in music. By the start of the decade, the traditional, jazzy, and indigenous mbaqanga was in vogue; however the decade would end with the rise of Afro-techno pop. Saturday Night: South African Disco Pop Hits 1981-1987, a compilation from Cultures Of Soul, captures a period of significant cultural and societal upheaval with a unique take on disco and soul as a traditional era between traditional music and contemporary.

Consisting of 10 tracks from seven different artists, Saturday Night: South African Disco Pop Hits is disco like you’ve never heard. Opening with the bombastic title track, “Saturday Night”, by Varikweru, the album kicks off on a groovy and high energy note.  Despite the cultural differences, “Saturday Night” feels familiar as the song is densely layered with drums, synths, and melodic and harmonic vocals in style of Chic. In contrast, the following track, Margino’s “You And Me” infuses a distinctly afro-pop sense to a track that very well could have been performed and written by Madonna. It is the afro-pop influence that, of course, elevates the song beyond a generic ‘80s pop hit, giving the song a unique cultural flare.

Such a synthesis between cultural spheres only grows as Saturday Night: South African Disco Pop Hits continues. Songs like Hot Soul Singers’ “Good Vibes” brings a reggae inspired instrumental track fronted by lush disco vocals while Supa Frika’s “Let’s Get It On” and “Love Satisfaction” bridge the funk of Kool & The Gang with Afrocentric roots – while also making a case for two of the strongest songs on the record. However you look at it, Saturday Night: South African Disco Pop Hits is a fascinating look at the cultural presence of South African music in disco and soul – something most would largely consider to be an African-American musical innovation.

Saturday Night: South African Disco Pop Hits 1981-1987 is a fascinating case study of globalization and how the diaspora of culture between nations and decades can lead to a unique reinvention of art. Furthermore, it explores the creative process under a brutally oppressive and racially segregated society, which ultimately denotes a sense of defiance and celebration of culture against all odds alongside a glimmer of hope amidst a transition towards the end of apartheid and the eventual rise of Nelson Mandela. As a result, Saturday Night: South African Disco Pop Hits 1981-1987 is a strong compilation that proves to be both intriguing and exciting and a must-listen for anyone who enjoys disco, soul, and funk.