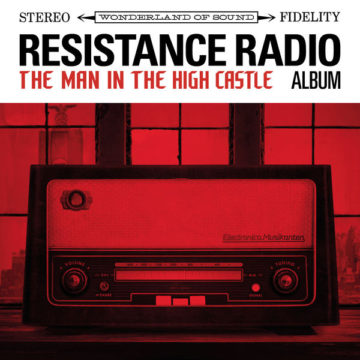 A  compilation album put together by Danger Mouse and Sam Cohen as an imagined soundtrack from the Amazon series The Man In The High Castle.  The title, Resistance Radio is borrowed from that show and is the name of the pirate station featured in that show.

The idea, it seems, is for old standards to be covered by today’s artists (and some not really  from today).  The main problem is that cover albums are tricky.  The best ones are the ones in which the artist has some kind of historical or emotional tie to the music (think David Bowie’s Pin Ups, Bryan Ferry’s These Foolish Things, John Lennon’s Rock ‘n’ Roll).  Various artists compilation  are even more tricky  Again, the best ones are based around a theme and the artists involved work within a certain parameter (think the incredible Stay Awake, as realised by Hal Willner or Peter Gabriel’s Scratch My Back) .

On Resistance Radio: The Man In The High Castle Album, although there are some very fine artists and very fine songs, the two elements don’t seem to connect.  There are some brilliant moments when everything falls into place.  Kevin Morby makes “I Only Have Eyes For You” his own, almost making you forget The Flamingos ever touched it.  He does this with strong production, clever arrangements and incredibly smooth vocals.  Andrew VanWyngarden takes “Nature Boy” and turns it upside down with an arrangement that turns the warm Nat King Cole song into a nightmare.  But these moments are very few and far between.

Some of the covers do not work at all.  Norah Jones, a terrific talent in her own right, just does not do justice to “Unchained Melody”.  She seems to lose the melody and the arrangement does not flatter her voice.  Beck seems to be smirking through “Can’t Help Falling In Love With You” which proves somewhat distracting and Grandaddy seems to be uninterested in the song “Love Hurts”.

To be honest, the majority of the artists just do not seem to be committed to the project.  When I saw the songs and the artists involved, I was very excited, but the album does not live up to expectations.  Perhaps the artists would have done better with songs from their childhood.

As a side note, I cannot help but think this album reflects today’s music.  In the 50’s (an era where most of these songs come from), it was all about the single.  Albums had fillers and pop/rock fans focused on the single. The Beatles changed all that, and for about 40 years it became about solid albums.  Now, with downloads, we are really back to the 50’s.  Download the single and ignore the album.  This compilation is made for downloading and I am sure many select songs will find their way into playlists somewhere.

Born and raised in Whitby, Aaron discovered music through his love of The Beatles. This led to a career in radio, writing for various publications, and ultimately a radio show about The Beatles (Beatles Universe), which ran for over four years. When not immersed in music, Aaron enjoys spending time with the loves of his life -- his wife Andrea, and daughters Emily and Linda (all of whom have an intense love of music too).
RELATED ARTICLES
album reviewsdanger mousekevin morby
8.0