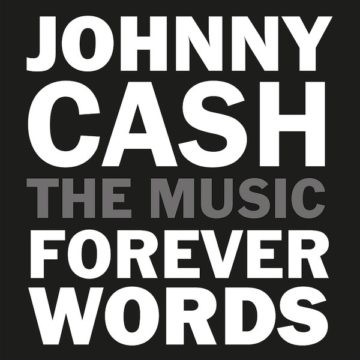 Sixty-three years after the release of his debut single, “Cry! Cry! Cry!”, and fifteen years since his passing, Johnny Cash remains as relevant as ever with the release of Johnny Cash: Forever Words The Music. Cash, with a stellar discography that spans over five decades, needs little introduction nor does his legacy need any justification. This compilation album features a wide-ranging cast of artists, including his daughter Roseanne Cash, country superstar Brad Paisley, and the last known recording from Chris Cornell, covering sixteen unreleased tracks from Cash.  Rather than be a typical collection of covers, Johnny Cash: Forever Words The Music sees these artists take some of Cash’s lyrics and poems that were never set to music and adapt them to what is among the most powerful tributes to one of America’s greatest song writers.

Johnny Cash: Forever Words The Music opens with a short spoken word piece, “Forever/I Still Miss Someone” by Kris Kristofferson and Willie Nelson. The track feels like the perfect tribute to Cash while transitioning the vibe of the record from a tribute cover album to one driven by poetry and lyrics. After all, the song features Kristofferson’s gruff vocals reciting an unreleased poem with Nelson playing a thing and twangy electric guitar to Cash’s classic “I Still Miss Someone”. While brief, this song is incredibly heavy emotionally, especially when you consider the fact that Kristofferson and Nelson were both very close friends of Cash’s. The album continues with a very traditional duet from Ruston Kelly and rising country star, Kacey Musgraves. “To June This Morning” sounds like a modernized version of something written by Cash and his wife, June Carter Cash, with the evenly balanced vocal harmonies and soft fingerpicking of an acoustic guitar and banjo. Throughout the album, a number of artists channel such a traditional sound including Alison Krauss & Union Station on “The Captain’s Daughter”, The Jayhawks on “What Would I Dreamer Do?”, I’m With Her on “Chinky Pin Hill” among others. A special shout out must go to Jewel’s breathtaking performance of “Body On Body”, a song with a sophisticated pop vocal line, but with a very traditional instrumental foundation, and T Bone Burnett’s hard hitting juke jam on “Jellico Coal Man”.

Cash embodied a highly unique style of performance and songwriting, and while much of Johnny Cash: Forever Words The Music sees a number of artists attempt – with great success – to emulate this, certain artists on the album reach a creative level that is nothing short of outstanding when they embark in a drastically different direction. “I’ll Still Love You” by Elvis Costello, for example, is a longing ballad with Costello’s raw voice bellowing over a warm piano, orchestral strings, and jazzy horns. While ambitious, Costello delivers a jaw dropping performance that only he could. The same could be said for Chris Cornell on “You Never Knew My Mind”, a track that would fit seamlessly on his 2015 release, Higher Truth, and in his stunning acoustic solo shows. The melancholic ballad leans heavily on Cornell’s unique songwriting as the song follows a compelling chord progression and grows to feature a fuzzy and dark electric guitar droning far in the background that is eventually buried by warm and rich gospel inspired vocal harmonies that culminated with a simple electric solo. This gives the song a sense of intensity not reached elsewhere on the album and a climatic final chorus. Cornell’s voice – raspy, warm, belting, and gravelly – is nothing short of beautiful and heartbreaking all in one. His performance and adaptation of “You Never Knew My Mind” stands out as not only the best track on the album, but also a reminder as to the boundless artistry of Cornell.

Johnny Cash: Forever Words The Music is an excellent collection of music that sees artists of all generations and styles set the words of Cash to music in whichever way they felt was right. While many veered for a modernized twist to his classic sound that teetered in between ‘50s rock, country, folk, rockabilly, and the blues, some artists took it a step further. It is here that we see how the legacy of Cash has inspired artists of all walks of life since his debut over half a century ago. It is clear with this album that things such as influence, inspiration, and legacies are an interesting thing; as an artist, you may control your art and image, but how that is interpreted and then reflected by the next generation is beyond your reach. Everyone and anyone, from jazz musicians to metal-heads, can take something away from Cash’s discography and that is where the power lies in Johnny Cash: Forever Words The Music. It is clear that the music of Cash resonates just as strongly today as it did throughout the many peaks of his illustrious career. Long live Johnny Cash.

A passion for music has always been a part of Gerrod’s life. As a young boy, he was raised on a steady diet of the music from The Chili Peppers, Aerosmith, The Stones, Prince, and others from his mum. Raised in the GTA, Gerrod continued to foster his love for music by attending a wide range of concerts and learning the drums. His unapologetic passion for music has no bounds and has spread to a wide variety of styles, whether it be the 90’s rock that sound tracked his teenage years, the jazz he studied in university, or his newfound love for hip-hop. He recently received his bachelors in music and education from York University and is passionate about writing and reviewing good (and less than good) music. Gerrod is also the drummer and songwriter for a Toronto based rock & roll band, One In The Chamber.
RELATED ARTICLES
album reviewsjohnny cashlegacy recordings
9.0