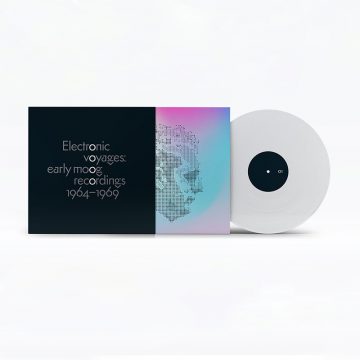 Electronic Voyages: Early Moog Recordings 1964 – 1969 is not a soundtrack, but a companion to the upcoming documentary about Robert Moog:Electronic Voyager. Curated by the film’s producer Jason Amm, the album demonstrates that the Moog Synthesizer has been used in pop records since the early 1960s. The synthesizer was always thought of as an avant-garde instrument used in pretty far-out, experimental music, but Moog thought that his own creation could be used for more mainstream music.

Although the songs are fascinating to listen to, they are far from the standard pop music of the 1960s. That is not to say they’re bad – because they’re not – but they are definitely not pop. Lothar and the Hand People’s “Milkweed Love” (1968) comes close to pop, and despite its oddness,is a great song which remains a fantastic piece of musical history.

The other songs run the gamut of jazz-influenced to straight electronic. The listener will hear music that has not been heard for many years – songs which did not get a great deal of attention even at their time of release. It is hard to imagine a record company executive thinking that Ruth White’s “The Clock” (1969) would be a hit, a song which is actually quite creepy and frightening.

Amm has done a fine job assembling a very listenable history lesson. Electronic Voyages: Early Moog Recordings 1964 – 1969 is a fun trip into Moog Synthesizer land with many twists, turns, and surprises. It also succeeds in creating interest in the upcoming documentary on Moog.

Born and raised in Whitby, Aaron discovered music through his love of The Beatles. This led to a career in radio, writing for various publications, and ultimately a radio show about The Beatles (Beatles Universe), which ran for over four years. When not immersed in music, Aaron enjoys spending time with the loves of his life -- his wife Andrea, and daughters Emily and Linda (all of whom have an intense love of music too).
RELATED ARTICLES
album reviewalbum reviewsBob Moog
8.0