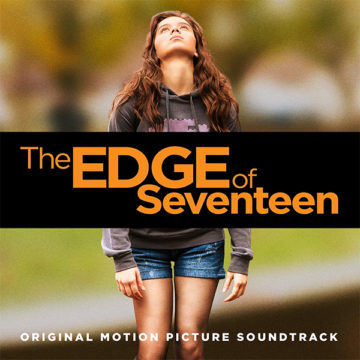 Saturday Night Fever may have started it, but John Hughes perfected the various artists’ soundtrack albums. For those of us old enough, who can forget buying the Pretty In Pink soundtrack and enjoying New Order, OMD Suzanne Vega? But the floodgates opened. Since then, there have been thousands of soundtracks featuring songs both in the movie, and ‘inspired by’ the movie.

The latest installment is the soundtrack to Kelly Fremon Craig’s film Edge of Seventeen. Here we have a collection of new and old songs (Aimee Mann’s “Save Me” makes a welcome return, as does The Cinematic Orchestra’s achingly beautiful “To Build A Home”). Some of the newer songs work, others don’t (The Struts’ “Ballroom Blitz” lacks the energy of the original). Birdy comes through with “Ghost In the Wind,” and The 1975 standout with “Somebody Else.” The songs work well in the film, and as an album, as with most various artists collections, it is hit and miss. It is an opportunity for artists to provide songs to promote upcoming releases (Two Door Cinema Club, for example), but when the songs seem to be written specifically for the film, they work better.

The instrumental ‘soundtrack’ pieces composed and performed by Alti Orvarsson beg for a more complete release of this music, as the two songs here are worth the price of admission alone. But, the main question: where is Stevie Nicks’ “Edge of Seventeen”? Surely someone could have approached Florence and The Machine, or Cat Martino to cover this classic. But overall, the album is a pleasant, if uneven, listening experience.

Here's what we think...
Spill Rating
Fan Rating
Rate Here
New Criteria
10
—
6.0
Total Spill Rating
—
Total Fan Rating
You have rated this
Album Reviews
album reviewsalti orvarssonbirdyghost in the windsomebody elsesony music canadathe 1975the edge of seventeenthe generationalsthe hugvarious artistswhen they fight they fight
album reviews, alti orvarsson, birdy, ghost in the wind, somebody else, sony music canada, the 1975, the edge of seventeen, the generationals, the hug, various artists, when they fight they fight
About the Author
Aaron Badgley

Born and raised in Whitby, Aaron discovered music through his love of The Beatles. This led to a career in radio, writing for various publications, and ultimately a radio show about The Beatles (Beatles Universe), which ran for over four years. When not immersed in music, Aaron enjoys spending time with the loves of his life -- his wife Andrea, and daughters Emily and Linda (all of whom have an intense love of music too).
RELATED ARTICLES
album reviewssony music canadathe 1975
7.0