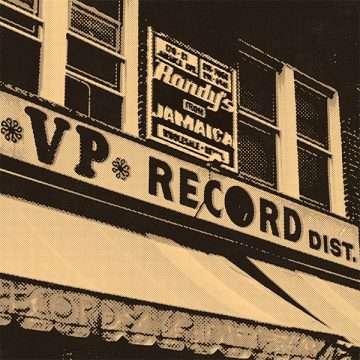 After the death of Bob Marley in 1981, international interest in Jamaican music decreased sharply, particularly once the sound was altered with the digital revolution which changed the music almost literally overnight in 1985.

Down in Jamaica concentrates on the music of this time period, with 101 artists presented on this handsome box set. It contains four CDs, four 12-inch singles, and four seven-inch singles, as of course the music here was originally made for the singles market. The more than five hours’ worth of music, in chronological order, comes with an informative 24-page book as well as art cards.

VP Records was initially founded as the United States’ arm of Randy’s Records, which has been involved in recorded Jamaican music since the earliest days and is now the world’s biggest reggae record label. This set contains all the big names – I can’t think of anyone making significant music for the reggae audience in the last couple of decades who isn’t here. Some real rarities are also included.

There are very few tracks not immediately listenable. The rather bawdy slackness of, say, Lady Saw, is balanced by the righteous fury of, for example, Bobo Dread artist Capleton on his apocalyptic “Jah Jah City.” In fact, the sometimes-expressed opinion that spirituality vanished from Jamaican popular music in the late ‘80s and ‘90s is not really supported on this set. There are some tracks with minimalist computer accompaniment, but most show how quickly real musicians managed to accommodate themselves to the new style.

There are of course the rock-stone performers: people like Shabba Ranks, or Jigsy King on “Gi Mi Di Weed.” Also Spragga Benz, whose flow on“She Nuh Ready Yet” is simply awesome and is, I would say, an influence on the UK grime scene.Interestingly, Buju Banton, who was at one time considered perhaps the most typical of such performers, is represented by his mellow, Rasta-inspired “Destiny.”

There are very few gunman-style lyrics, though Michael Prophet’s infectious “Gunman” (which is certainly not to be included in that category) is one of the earliest tracks here. It is so good too to hear the late, great Garnett Silk’s “Lord Watch Over Our Shoulders” again, reminding us just what a tragedy his early death was.

Then there is the way Jamaican music constantly adapts songs from other genres. Sean Paul and Sasha’s dancehall cover of the rock steady classic “I’m Still In Love With You” is certainly one of the highlights of this set, with backing tracks that are reworked and reinvented. Expect too to find phrases pinched from the likes of The Beatles, the Spice Girls, and even Phil Collins.

There are also uniquely Jamaican covers of Tracey Chapman’s “Baby Can I Hold You Tonight” by Foxy Brown and Take That’s “Want You Back” by Singing Melody. Meanwhile, Bunji Garlin illustrates the company’s occasional interest in soca with his Trinidadian ragga-soca blend,“Big Bad Soca.”

It would be easy to go on and on about this rather wonderful release. If you want it –if you have any interest in Jamaican music over the last 40 years, you really should – I’d advise you to hurry.

The Spill Magazine is a Toronto-based online publication dedicated to covering the independent music scene with a strong focus on our thriving hometown talent. Our writers bring you up-to-date news, in-depth features on musicians and reviews for the latest CD releases. We also travel to the front lines for all local festivals including Canadian Music Week and North by Northeast. Don’t forget to check out our Facebook and Twitter pages for all daily Spill updates.
RELATED ARTICLES
album reviewalbum reviews
9.0