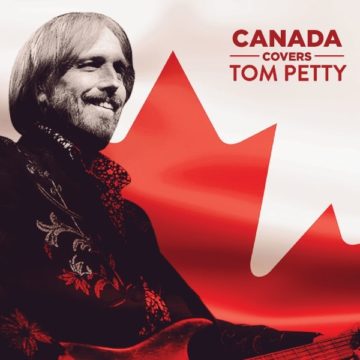 Tom Petty departed this world on October 2, 2017. Just a little over a year later, Jadea Kelly has put together something special to honour Petty while promoting independent Canadian talent. For this compilation, Kelly has put together a playlist for Spotify with independent Canadian artists delivering Petty songs in their own way. These songs are new recordings by the respective artists.

Tribute albums are nothing new, but curating both a  Spotify  and a YouTube playlist something new and intriguing, as it could be added to throughout the year, should she choose. The artists here are clearly fans, and in some cases have been influenced by Petty throughout their career (Sam Cash comes to mind). That does not mean that these bands just duplicate Petty, in fact quite the opposite. Molly Brown’s take on “Walls” or Dave Allen’s take on “Don’t Fade On Me” (Wildflowers, 1994) turn the original Petty songs into something totally different.

The choice of songs are also interesting. Some of the hits are here (“American Girl” covered by Nick Teehan and “I Won’t Back Down” as interpreted by Maggie Szabo), but it is the deeper album cuts that prove most interesting. Ben Heffernan does an incredible job with “Angel Dream” from the 1996 album Songs and Music from She’s The One and Dwayne Gretzkey’s take on “Time To Move On” from 1994’s Wildflowers.

Petty released 17 albums in his lifetime, two with The Wilburys (and I am shocked none of the Wilbury songs are covered), and a further two with Mudcrutch. Picking your favourite Petty song or the song to cover cannot be easy. These artists, however, chose songs that allow them to do what they do best. My only wish is that other styles of bands had been asked to contribute, electronica or dance, or even metal. It would provide some jarring but interesting moments. Think Disturb’s take on “Sounds of Silence”. Something along those lines would be welcomed on the compilation, and it is not too late.

Petty was, and is, an icon. An artist that is loved, respected and deeply missed. He was never afraid to stray from his sound and style. Petty, himself, did not cover a lot of songs,but when he did, he turned them into his own. Listen to his cover of “Feel A Whole Lot Better” (originally by The Byrds). He was an original artist who influenced generations of musicians. But Kelly, by putting this together, has served two excellent purposes. The first is a tribute to a brilliant artist and exposure to some of his lesser known songs. She has also shone a light on some incredible independent Canadian artists for people to explore further.

Kelly is also bringing the tribute to The Dakota in Toronto on December 20, 2018, featuring artists that contribute to this tribute playlist.

Born and raised in Whitby, Aaron discovered music through his love of The Beatles. This led to a career in radio, writing for various publications, and ultimately a radio show about The Beatles (Beatles Universe), which ran for over four years. When not immersed in music, Aaron enjoys spending time with the loves of his life -- his wife Andrea, and daughters Emily and Linda (all of whom have an intense love of music too).
RELATED ARTICLES
album reviewalbum reviewsjadea kelly
7.0