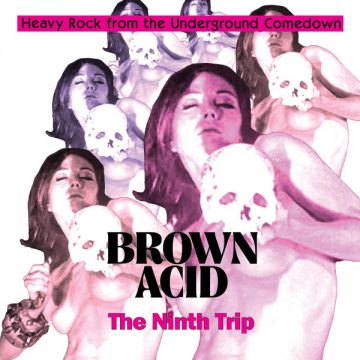 Riding Easy Records are obviously doing well with their Brown Acid series, now in its ninth incarnation. It is probably time again for all fans of late ’60s, early ’70s heavy psych rock, and rock archivists in general, to rejoice. This is the stuff before heavy psych turned into heavy metal in one form or the other, and the precursor to what is now known as stoner rock.

Being able to scour deep depths of the Internet for ‘lost gems’ is at the same time a blessing and a curse, as those gems can often turn out to be serious duds, and those are quite abundant too.

Lance Barresi, co-owner of the L.A./Chicago retailer “Permanent Records” and along with Daniel Hall of RidingEasy Records, joint curators of the Brown Acid series, seem to have an abundant passion in tracking down obscure singles and putting them in front of their expectant audience.

One of the things that distinguishes them in their quest is the fact that instead of simply bootlegging the tracks they find, they try to get in touch with the bands and actually license all the music they put out.

As far as the music is concerned, The Ninth Trip is to a tee exactly what the description says – a lot of fast-paced, fuzzed, sustained heavy psych. This time around, the curating duo was practically able to do their selection without any duds. Of course, all now rests with whether you are a fan of heavy psych or not. If you are, remember however that your neighbours might not be.

Formerly a lot of things, including a journalist and a translator, currently a freelance writer living in The Netherlands.
RELATED ARTICLES
album reviewalbum reviewsbrown acid
9.0