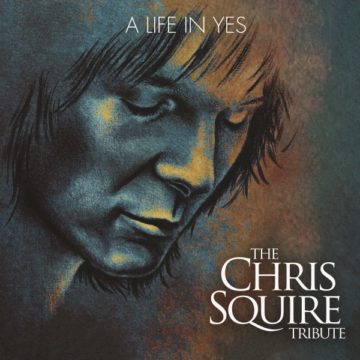 Sitting here, listening to prog rock and considering the redundancy in the phrase “self-indulgent wank-fest”. But wait ­– what’s that sound?

How does a music producer improve on the technical skill in performance, the sense of exploration and the overall awesomeness that was the band Yes, and its late bass player, Chris Squire? By employing equally awesome musicians who have an emotional stake in the music and are up for the task – that’s how! Lovingly produced by the current bass player in Yes (Squire’s friend and frequent collaborator), Billy Sherwood, A Life in Yes: The Chris Squire Tribute is a touching homage to the late bassman.

A founding member of Yes, and as its only bass player from the formation of the band in 1968 until his death in 2015, Chris Squire was a true pioneer of progressive rock. How interesting that Squire originally formed Yes partially out of necessity, as he had a difficult time getting session gigs in the early days. The band truly became his life’s work. Playing, writing, and recording with Yes gave Squire the freedom to create and grow, developing his expressive and melodic style.

This album is full of progressive rock conventions: big philosophical questions, evocative lyrical imagery, extended solos and musical virtuosity. With Billy Sherwood’s bass playing as a touchstone to the original Squire bass sound, the contributing musicians have the freedom to stay as close to (or as far from) the original recordings as they wish. Case in point can be found in the most popular Yes song, “Roundabout”. Guests Todd Rundgren, John Wesley and Tony Kaye turn in serviceable performances, but there’s not much that’s different here. Nothing new is really added to the song. If anything, the guitar sound is a little less dynamic than the original.

In other cases, guest artists breathe fresh air into these old songs. The choice of using Annie Haslam as lead vocalist on “Onward” is brilliant. While being no less beautiful than the original, the updated version possesses a clean, lush sound, aided by the ancient-music/folk honesty of Haslam’s voice, as well as slide guitar and shimmering harmony vocals.

There are plenty of standout performances on this album. The organ work on “Don’t Kill the Whale” features Brian Auger doing what Brian Auger does best: staying funky and pushing the envelope of sound forward, while maintaining a connection to the song’s essence. Similarly, the David Sancious and Steve Stevens contributions to “South Side of the Sky” include stunning guitar and keys work, and a brief foray into jazz piano, while staying ultimately true to the Yes sound.

In a nod to Chris Squire’s solo work, a great version of “Hold Out Your Hand” from Squire’s 1975 solo album Fish Out Of Water is present here, featuring Steve Hogarth and Larry Fast. Squire can also actually be heard on the two bonus tracks: “The Technical Divide” (collab. with Gary Green and Alan Parsons); and his take on the iconic Pink Floyd song, “Comfortably Numb” contains a few surprises.

The list of guest artists on this project goes on and on, including current and former members of Yes (check the web link for a complete list). Despite the revolving door of players, the result is a cohesive package, with Sherwood as the glue. Are these songs better than the originals? Are they meant to be? That’s your call.

Bryan Williston has been involved in music since he was a young child. A veteran singer, songwriter, and music educator, Bryan has enjoyed playing a multitude of musical genres in a variety of outfits, over the years. Bryan lives in Whitby, Ontario.
RELATED ARTICLES
album reviewalbum reviewschris squire
8.0