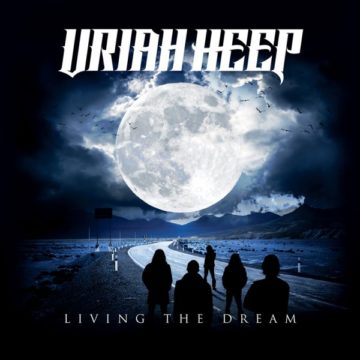 Uriah Heep has been around a long time, 47 years to be exact (their debut album Very ‘Eavy…Very ‘Umble was released in 1970), and Living The Dream is their 23rd studio album. It is their first since 2014’s Outsider. Over the years there have been many member changes, and the only original member is guitarist Mick Box. The current incarnation of Uriah Heep has been together since 2013, when Davey Rimmer joined the band.

Canadian engineer/producer Jay Ruston was called in to produce this album and he brings his experience with heavy metal bands and puts it to good use. This is not the Uriah Heep of old. There is very little acoustic material, and very little of wizards, and kingdoms. Instead, Living The Dream is heavy metal, sometimes veering towards speed metal. It is good that the band has kept up with the times, but at times the album does sound somewhat dated, and would not be out of place in the late 1980s.

As a band, they are tight. The years of touring have certainly paid off. They sound like they have been together a lot longer than they have. The instrumentation and musicality is top notch and fans will enjoy the numerous solos. The vocals are perfect for the music and the songs are bursts of energy. The songs also sound like they were written and arranged to play live. In fact, I am pretty sure these songs will benefit from being performed in front of an audience.

Uriah Heep is not the same band as they were in the 1970s. They have lost a lot of their original sound. That is not to say they are not playing well or that it is a bad album, as it is not. But it really is generic at times and the uniqueness of Uriah Heep seems to be missing from Living The Dream. But, for a band with their history, it is great that they continue, especially as a touring band for fans to see these heavy metal icons.

Living The Dream does not have any surprises and the album is pretty much what the listener would expect. Fans take note that there are many versions of the release, each with bonus material and one version including a DVD.

Born and raised in Whitby, Aaron discovered music through his love of The Beatles. This led to a career in radio, writing for various publications, and ultimately a radio show about The Beatles (Beatles Universe), which ran for over four years. When not immersed in music, Aaron enjoys spending time with the loves of his life -- his wife Andrea, and daughters Emily and Linda (all of whom have an intense love of music too).
RELATED ARTICLES
album reviewalbum reviewsfrontiers music srl
7.0