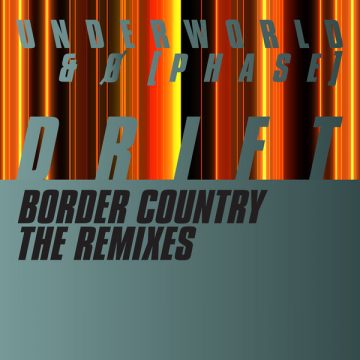 “Border Country” is a song from Underworld’s most recent album, Drift Series One. It is a track co-written by Underworld and Ø [Phase], who is actually producer Ashley Burchett. Border Country – The Remixes is an E.P. collecting three new mixes of that song. It is clearly meant for the dance floor and D.J.’s. Unlike the mother-ship from where it came, this is not your typical sit down, and enjoy the music E.P.. This is dance!

The first remix is courtesy  techno legends, Adam Beyer and Bart Skils and it kicks things into high gear, a full eight minutes or rapid beats, repetition and the old vocal mixed in. The second track is merely a radio edit of the lengthy opener. To be honest, even though almost half the song is gone, I don’t think it is going to be hitting commercial radio anytime soon.

The third and final remix, titled “Ø [Phase] Dark Room Tension Dub” brings it all together. It reminds me of some of their earlier dub mixes from previous albums. But this ‘dub’ is perhaps the more interesting of the two. It is shorter and does not have vocals. It pounds away at you like a hammer but the end result is more satisfying. I imagine this being blared at top volume on a dance floor would be a whole new experience.

No doubt this EP is the first of many to be released from Drift Series One. Border Country – The Remixes, does what it sets out to do, produce and remix two versions of a song to be heard on the dance floor. In that sense, it is a success. For my money, I prefer the original and I prefer it as part of the larger picture (i.e. the album).