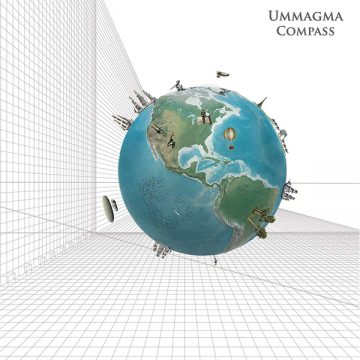 Compass is the perfect title for Ummagma’s new album, with visions of a caravan travelling the world – or even other worlds – gathering and trading. This is the sound of a band that has been travelling the musical world, gathering as they go. It is an incredible, unpredictable, and entirely original album. Ummagma, comprised of Alexx Kretov and Shauna McLarnon, make a wonderful noise.

On Compass, the duo’s first album since 2013’s Frequency, they explore and experiment with different world music sounds as well as a number of other genres. Their core may be electronica, but there is more, much more.

African beats morph into electronic dance beats. Folk morphs into prog rock.Everything comes to ‘chill’ with the soothing sounds of “F-Talking” and “Galaction.” As the album plays, one is never sure what to expect, but it all fits together. This is the equivalent of a musical puzzle. When listened to in full, a coherent and consistent album emerges.

Ummagma has a solid understanding of pacing and sequencing an album. The first half, a bit more electronic and a bit more dancey, gives way to the more mellow prog and instrumental moments of the album. Compass concludes with the angelic “Bouquet,” which seems like music from another astral plane.

Of note are McLarnon’s vocals. Part Liz Fraser, and part Kate Bush, they are nevertheless entirely her own style. The musical accompaniment works on all levels, making the album not only complete, but a complete pleasure. Kretov has done an excellent job with the production and recording of this duo.

Compass is a brilliant album, from beginning to end. It is one of the strongest albums I have heard this year, and there have been many solid albums released. This is an album that should be on any music lover’s shelf (or Cloud). Let us hope we don’t need to wait another six years for the next album!

Born and raised in Whitby, Aaron discovered music through his love of The Beatles. This led to a career in radio, writing for various publications, and ultimately a radio show about The Beatles (Beatles Universe), which ran for over four years. When not immersed in music, Aaron enjoys spending time with the loves of his life -- his wife Andrea, and daughters Emily and Linda (all of whom have an intense love of music too).
RELATED ARTICLES
album reviewalbum reviewsleonard skully records
8.0