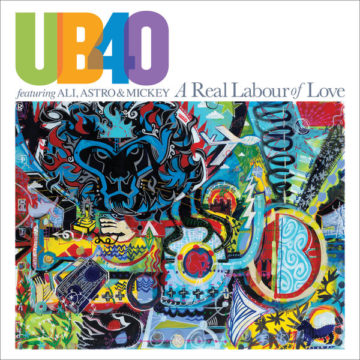 UB40 formed in 1978, with their name coming from the British Unemployment benefit form, number 40. Unemployment Benefit gave them the UB and the 40 was the form number, hence UB40. They were a  large band playing reggae/post punk pop and they created their own distinct sound/style. They released their first album in 1980 (the now classic Signing Off), and from 1980 to 2008 they remained a fairly static band, releasing a number of world wide hits and very successful albums. In 2008 it sort of came apart, when lead vocalist Ali Campbell left the band to pursue a solo career (he did release some terrific solo records, especially 2009’s Flying High). From that point on other members left, including two members, Astro (vocalist) and Mickey Virtue (keyboards), who later formed a new version of UB40 with Campbell. Their first album with this configuration was released 2014 (Silhouette), which was a top 20 hit in the U.K..

The problem was, that the other members of UB40 also had a version of UB40 going, so at one point there were two UB40’s. This band distinguishes itself by adding the ‘featuring Ali, Astor & Mickey’. A Real Labour of Love is their first album under this name, and a welcome return to what UB40 does best. Although UB40 wrote many brilliant songs, they are known as a band that records covers and turn them into their own. How many people even knew that Neil Diamond originally wrote “Red, Red Wine”? It became a UB40 song.

This is another album of covers (note the tip of the hat to Labour of Love in the title, their first album of covers). Here the trio tackle songs from the 1980’s. There are exceptions, such as a cover of Stevie Wonder’s “A Place In The Sun”, which was originally released in 1966 and a remarkable cover of Dennis Brown’s . “How Could I Leave”, which was originally released in 1978. While Brown’s is the definite version, UB40 featuring Ali, Astro & Mickey do a fantastic job at finding the melancholy mood of the song and they have a brilliant arrangement, with good use of horns.

Their cover of J.C. Lodge’s “Telephone Love/Rumours” is spot on. This and most of the other songs, originate in Jamaica and were already reggae. So, unlike taking a song like “I Got You Babe” and remodeling it to fit reggae, here, for the most part, the songs’ origins are reggae. But they still seem to add their own distinct sound to the mix and continue to make the song their own.

Where the album is not at the best is when they simply replicate reggae versions of older songs. Such as “Ebony Eyes”, originally released by The Stylistics in 1971, but covered by Chosen Few in late 1980’s. UB40 featuring Ali, Astro & Mickey basically take that arrangement and duplicate. Not that it is bad, but it does lack the originality of their other covers.

The album is dedicated to John Johnson, a trombonist who has worked with Campbell for seven years, and previously had played with Simply Red. He passed away before the album was released. His playing, as usual is stunning, and adds to the mix extremely well. It is a loss and he will be missed. The album is a fitting tribute.

It is a good album, UB40 featuring Ali, Astro & Mickey were not trying to break new ground with A Real Labour of Love. The title gives it away, the album is a labour of love, but more. It is their chance to acknowledge the music that influenced them and to maybe alert 2018 listeners to some classic songs from the past that may be somewhat forgotten. A Real Labour of Love will be the perfect summer soundtrack and there is nothing wrong with that. Fans will not be disappointed, and newcomers or the curious will enjoy what they hear.

Born and raised in Whitby, Aaron discovered music through his love of The Beatles. This led to a career in radio, writing for various publications, and ultimately a radio show about The Beatles (Beatles Universe), which ran for over four years. When not immersed in music, Aaron enjoys spending time with the loves of his life -- his wife Andrea, and daughters Emily and Linda (all of whom have an intense love of music too).
RELATED ARTICLES
album reviewsub40universal music
8.0