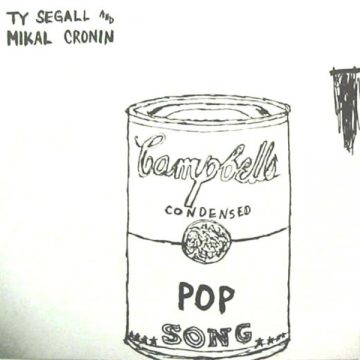 Long-time collaborators Ty Segall and Mikal Cronin are captured here in their very early days banging out riffs with tenacious brutality. Limited to just 300 copies upon its release in 2009, this relatively unknown EP definitely deserves reissue.

Clocking in a just 1:42, the title track is short and sweet with a great ’60s style guitar riff. Drenched in distorted reverb, this song kicks the EP off with a punch. The chords are simple and incredibly poppy but there the element of noise rock gives it a haunting ugliness.

“Kit Carson”, the third and final track on the EP, is by far the noisiest and sounds like a crossbreed of Coachwhips and Pussy Galore.

John Dwyer, founder of the Coachwhips and Oh Sees, has been a major influence not only on Segall and Cronin but the overall garage punk scene in general. On Pop Song, his influence is clearly felt. Cronin even went to collaborate with Dwyer in 2014 on Thee Oh Sees album Drop, on which he played saxophone on several tracks.

Both artists have grown considerably since this sleazy lo-fi piece, with Segall exploring genres like folk and glam and Cronin experimenting mainly with softer, psychedelic indie-pop. While not to say that their artistry does not shine through here, it’s safe to say that they hadn’t quite developed a sound of their own.

As a child growing up in the suburbs, Ryan found music as a way to soothe his boredom. After first hearing AC/DC at the age of 10, he was hooked on music. Tracing its roots to the ‘50s, he became obsessed with Elvis, Buddy Holly and Chuck Berry. Somehow that led to grunge, then psych-rock, then jazz, etc. The list goes on and on and his collection of vinyl records continues to grow.
RELATED ARTICLES
album reviewalbum reviewsgoodbye boozy records
6.0