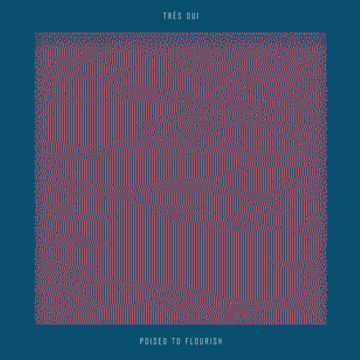 The culmination of Nate Cardaci’s gestating creative energy showcases itself with an inspired and arresting full-length debut from Très Oui. What originally started as a side project has flourished into a fruitful collaboration that includes Steven Garcia and Seth Whaland, who are also band mates of Cardaci in Literature, and synth player Ian Jensen. After building up steam with their debut EP, their full-length finds them finding their solid grounding as a band.

Over the course of 10 tracks, the band delivers an infectious brand of post-punk-infused dream pop that sticks with you. Infectious melodies provide the heartbeat for the entire record, as evident on album highlight “Looking For,” with its ’80s Cure-esque-inspired bassline and driving guitar melody. The song serves as the perfect introduction to the album and band as a whole. “Sunday’s Crowd” sees the band explore their sound through the filter of arena rock as the track soars with an instrumental backdrop laced with delay and reverb-soaked guitars that serve to take Nate Cardaci’s vocal prowess to new heights. It’s clear halfway through the record that perfectly-executed guitar and bassline melodies are the band’s bread and butter, and that produces an album that would fit neatly with some of the best albums from the ’80s.

The album closes out with the track “Wash Away,” that sees Nate Cardaci vocally dive into Smiths territory, while the band, along with a rousing and triumphant brass solo, brings the album to its climactic conclusion. It’s hard to imagine that this is the band’s debut LP, as they’ve mastered the craft of writing well-executed post punk that strives to reach beyond the genre’s expectations. In the years they’ve spent formulating their sound and finding their footing as a band, they’ve stumbled upon a fresh and exciting take on a genre and sound, one that almost every new indie and alternative band seems to be infatuated with these days.

Carlos Cajina is a documentary photographer and writer based out of Toronto. With a passion for storytelling, his love of photography is equally matched by his passion for music. At night, he moonlights as a freelance writer and music journalist, covering the latest in local and independent music culture for various blogs and outlets.
RELATED ARTICLES
album reviewsrevolver
10