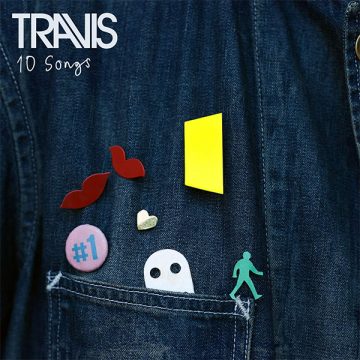 The same melodic, emotional sincerity that made Scottish band Travis famous has also made the four-piece a music press target, patronizingly dismissed as a guilty pleasure. On ninth album 10 Songs, Travis alternates between yearning, piano/folk ballads and mid-tempo rock songs influenced by The Band and Bob Dylan.

On standout track “The Only Thing,” lead singer and songwriter Fran Healy duets with Susanna Hoffs of The Bangles. Their voices complement one another perfectly in this country-rock torch song. Augmented by pedal steel guitar and strings, the arrangement is warm and poignant. “Waving At The Window” and “Butterflies” are lilting, mid-tempo numbers sent from a friend, enjoyable for reasons beyond sounding like The Eagles.

Less enjoyable are the strained falsetto walkabouts in “No Love Lost” and “All Fall Down,” although Joni Mitchell, Healy’s idol, might disagree. You’ve heard “A Million Hearts” a million times already, with its canned Coldplay piano chords and “Three Times a Lady” chorus—nothing litigious, but a good excuse for Healy to phone Lionel Richie.

Cribbing from R.E.M.’s Monster playbook, the sudden development of angry, snarling guitars and a low end for “Valentine” means Travis has gone death metal! Backed with Beatles vocal harmonies and minor-key acoustic strums, Healy sings of nostalgia and regret without a trace of either in his delivery: “Wipe the memory from the track/Put your teeth back in your mouth.” This more modern McCartney tune is melancholy, yet oddly uplifting: that’s Travis.

“How come all the best dads have gone?” is a legitimate concern in “Nora’s Song” for Healy, a dad himself who grew up without his father. While the (other) best dads have probably hit the skip button looking for “Valentine,” the drama and lyrical directness of “Nora’s Song” make it the Guiltiest Pleasure of all 10 Songs.

Charles T. Stokes is a nonprofit resource development coordinator and donor researcher based in Denver, USA. He’s also a tennis player and writer looking to make a racket with his own noises. “There are places in the world where one cannot publicly listen to or perform whatever music they choose without fear of harassment or prosecution. The freedom to write about new music is power, a privilege.”
RELATED ARTICLES
album reviewalbum reviewsbmg
7.0