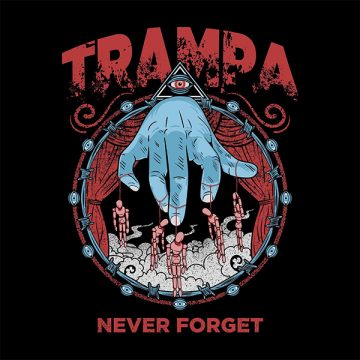 Hailing from Brazil, alternative hard rock/metal band Trampa have released their latest EP, Never Forget. “Anti-Fascists Since 2006,” as their shirts say, Trampa has enjoyed a growing career for over a decade. In the past few years, thanks to Indie Week, they have built a following amongst the Canadian music scene, so much so that this – the first out of their eight releases — is entirely in English

Hot off their recent Canadian tour, stretching from Edmonton to Montreal, Trampa’s Never Forget is a blistering five-track reflection of their energetic and engaging live show. The EP opens with the riff-heavy groove of “Burn!”, a track that certainly earns the title’s exclamation mark with its explosive, hard-hitting, and catchy-as-all-hell chorus. The song seamlessly bleeds into “Never Forget,” a title track that is a pure, adrenaline-driven punk rock banger. Between the opening tracks, Trampa establish themselves as equal parts rock as they are post-rock and as punk as they are metal, with perhaps two of the EP’s strongest tracks.

This alternative blend is furthered with “Enemy,” the heaviest track on the EP, with an abundance of throat-wrenching screams that match the ferocity of Rage Against The Machine’s Zack de la Rocha. “Contagious” brings the energy down a notch, creating a sense of balance to the record. This slow burner takes a more straightforward, modern alternative rock approach, demonstrating a rich sense of diversity to the band’s sound. That being said, the brief instrumental breakdown heading into the bridge is one of the strongest musical moments across Never Forget. The EP comes to a close with the rhythmically sophisticated grooves of “War.” This track is bound to turn the heads of musicians of all walks simply for its use of displaced rhythms and Latin beats under hard-hitting and vicious rock, which truly ends the EP with an even bigger band than it started with.

Should Never Forget be your first foray into Trampa’s work, it will drive you to check out their past releases – you’ll be hooked. If you’ve been a fan for a while, you’ll applaud Never Forget for bringing a refined edge to the band’s songwriting chops without sacrificing their chaotic musical style. While clocking in at under twenty minutes, this is a record worth keeping on repeat and cranking up the volume for.

A passion for music has always been a part of Gerrod’s life. As a young boy, he was raised on a steady diet of the music from The Chili Peppers, Aerosmith, The Stones, Prince, and others from his mum. Raised in the GTA, Gerrod continued to foster his love for music by attending a wide range of concerts and learning the drums. His unapologetic passion for music has no bounds and has spread to a wide variety of styles, whether it be the 90’s rock that sound tracked his teenage years, the jazz he studied in university, or his newfound love for hip-hop. He recently received his bachelors in music and education from York University and is passionate about writing and reviewing good (and less than good) music. Gerrod is also the drummer and songwriter for a Toronto based rock & roll band, One In The Chamber.
RELATED ARTICLES
album reviewalbum reviewstrampa
8.0