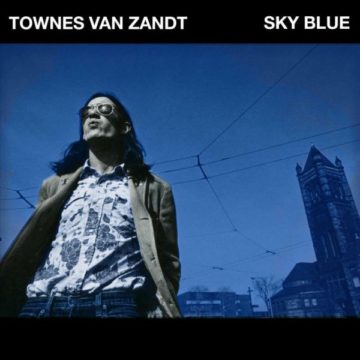 March 7, 2019 would have been Townes Van Zandt’s 75th birthday, and so it is a fitting release date for  an album of unreleased material. Van Zandt died on January 1, 1997 and in his lifetime he recorded ten studio albums. Those ten albums influenced artists such as Bob Dylan, Neil Young, Steve Earle, just to mention three.  Sky Blue is an album that clearly demonstrates what the fuss is all about. In some ways it is an excellent introduction to this talented writer and performer.

The songs on the album date back to 1973/74, but they sound like they could have been written and recorded in 2019. As with much of his catalogue, the songs are  timeless. There are 11 previously unreleased songs here, assembled and put together by his family. Given the beauty of this album, it makes one wonder what else is in the vault. But what is even more amazing, Sky Blue does not sound like an album of outtakes, but a brand new album by a genius.

There are numerous unreleased versions of songs we know and love. The version of “Poncho and Lefty” is one of the best available and “Rex’s Blues”, although an early draft, sounds as good as the released version.

There are also some never before released cover versions. The traditional, “Hills of Roane County,”  is an East Tennessee murder ballad from the 1880s . Van Zandt tackles it with beauty and respect to the traditional song. Also featured are Richard Dobson’s “Forever for Always for Certain,” and Tom Paxton’s classic “The Last Thing on My Mind”. It is cliché to say that he makes them his own, but it is true. These covers become Van Zandt songs, and they sound fantastic.

Perhaps of most interest is the inclusion of two previously unreleased songs, written by Van Zandt. “All I Need” and the title track, “Sky Blue”. It is amazing it has taken this long for the songs to have been released. They are both lyrically and musically stunning.

Sky Blue is, for the most part, Van Zandt and his guitar. What more do you need? He sounds somewhat weary but the passion in his voice is beyond compare. The recordings sound great and it is a rare commodity of an album that pleases both avid and casual fans.

Born and raised in Whitby, Aaron discovered music through his love of The Beatles. This led to a career in radio, writing for various publications, and ultimately a radio show about The Beatles (Beatles Universe), which ran for over four years. When not immersed in music, Aaron enjoys spending time with the loves of his life -- his wife Andrea, and daughters Emily and Linda (all of whom have an intense love of music too).
RELATED ARTICLES
album reviewalbum reviewsfat possum records
8.0